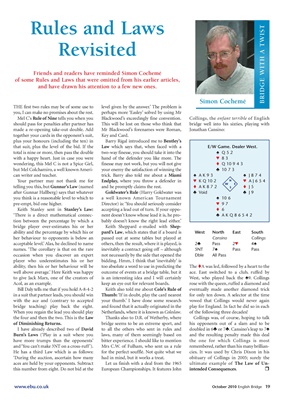 of some Rules and Laws that were omitted from his earlier articles,

and have drawn his attention to a few new ones.

THE first two rules may be of some use to level given by the answer.’ The problem is

you, I can make no promises about the rest. perhaps more ‘Easley’ solved by using Mr

Mel C’s Rule of Nine tells you when you Blackwood’s exceedingly fine convention. Collings, the enfant terrible of English

should pass for penalties after partner has This will be lost on those who think that bridge well into his sixties, playing with

together your cards in the opponent’s suit, Key and Card.

that suit, plus the level of the bid. If the Law which says that, when faced with a E/W Game. Dealer West.

total is nine or more, then pass the double two-way finesse, you should take it into the ´ Q52

with a happy heart. Just in case you were hand of the defender you like more. The ™ 83

but Mel Colchamiro, a well known Ameri- your enemy the satisfaction of winning the ® 10 7 3

telling you this, but Gunnar’s Law (named and he promptly claims the rest. t AK872 S t J5

pre-empt, bid one higher. Director) is: ‘You should seriously consider ™ 97

Keith Stanley sent in Stanley’s Law: accepting a lead out of turn. If your oppo- t 6

‘There is a direct mathematical connec- nent doesn’t know whose lead it is, he pro- ® AKQ86542

tion between the percentage by which a bably doesn’t know the right lead either.’

ability and the percentage by which his or pard’s Law, which states that if a board is West North East South

acceptable level.’ Alas, he declined to name others, then the result, where it is played, is 2® Pass 2™ 4´

names. ‘The corollary is that on the rare inevitably a contract going off – although 5NT 7´ Pass Pass

player who underestimates his or her bidding. Hmm, I think that ‘inevitably’ is

ability, then his or her behaviour will be too absolute a word to use in predicting the The tA was led, followed by a heart to the

well above average.’ Here Keith was happy outcome of events at a bridge table, but it ace. East switched to a club, ruffed by

to give Jack Marx, one of the creators of is an interesting idea and I will certainly West, who played back the ´9. Collings

Acol, as an example. keep an eye out for relevant boards. rose with the queen, ruffed a diamond and

in a suit that partner leads, you should win Thumb: ‘If in doubt, play the card nearest for only ten down. A selector at the time

with the ace and (contrary to accepted your thumb.’ I have done some research vowed that Collings would never again

bridge teaching) play back the eight. and found that it actually originated in the play for England. In fact he did so in each

When you regain the lead you should play Netherlands, where it is known as Coleslaw. of the following three decades!

the four and then the two. This is the Law Thanks also to D.R. of Wetherby, where Collings was, of course, hoping to talk

of Diminishing Returns. bridge seems to be an extreme sport, and his opponents out of a slam and to be

I have already described two of David to all the others who sent in rules and doubled in 6® or 7®. Cansino’s leap to 7´

Burn’s Laws (‘Play in a suit where you laws, many of them seemingly based on and the resulting penalty made this deal

have more trumps than the opponents’ bitter experience. I should like to mention the one for which Collings is most

and ‘You can’t make 3NT on a cross-ruff ’). Mrs C.W. of Fulham, who sent us a rule remembered, rather than his many brillian-

He has a third Law which is as follows: for the perfect soufflé. Not quite what we cies. It was used by Chris Dixon in his

‘During the auction, ascertain how many had in mind, but it works a treat. obituary of Collings in 2005; surely the

aces are held by your opponents. Subtract Let us finish with a deal from the 1965 ultimate example of The Law of Un -

this number from eight. Do not bid at the European Championships. It features John intended Consequences. r