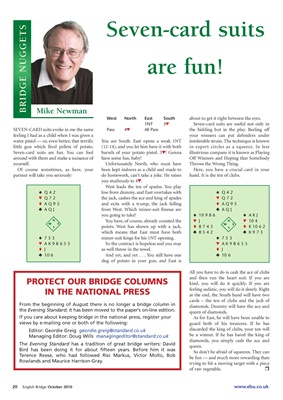 West North East South about to get it right between the eyes.

1NT 3™ Seven-card suits are useful not only in

SEVEN-CARD suits evoke in me the same Pass 4™ All Pass the bidding but in the play. Reeling off

water pistol — or, even better, that terrific You are South. East opens a weak 1NT intolerable strain. The technique is known

little gun which fired pellets of potato. (12-14), and you let him have it with both in expert circles as a squeeze. In less

Seven-card suits are fun. You can fool barrels of your potato pistol. 3™! Gonna illustrious company it is known as Playing

around with them and make a nuisance of have some fun, baby! Off Winners and Hoping that Somebody

yourself. Unfortunately North, who must have Throws the Wrong Thing.

Of course sometimes, as here, your been kept indoors as a child and made to Here, you have a crucial card in your

partner will take you seriously: do homework, can't take a joke. He raises hand. It is the ten of clubs.

West leads the ten of spades. You play

t AQ95 and exits with a trump, the jack falling t AQ95

t J as well throw in the towel. t J

slug of potato in your gun, and East is

All you have to do is cash the ace of clubs

and then run the heart suit. If you are

PROTECT OUR BRIDGE COLUMNS kind, you will do it quickly. If you are

feeling sadistic, you will do it slowly. Right

IN THE NATIONAL PRESS at the end, the South hand will have two

cards – the ten of clubs and the jack of

From the beginning of August there is no longer a bridge column in diamonds. Dummy will have the ace and

the Evening Standard; it has been moved to the paper’s on-line edition. queen of diamonds.

If you care about keeping bridge in the national press, register your As for East, he will have been unable to

views by e-mailing one or both of the following: guard both of his treasures. If he has

Editor: Geordie Greig geordie.greig@standard.co.uk discarded the king of clubs, your ten will

Managing Editor: Doug Wills managingeditor@standard.co.uk be a winner. If he has bared the king of

diamonds, you simply cash the ace and

The Evening Standard has a tradition of great bridge writers: David queen.

Bird has been doing it for about fifteen years. Before him it was So don't be afraid of squeezes. They can

Terence Reese, who had followed Rixi Markus, Victor Mollo, Bob be fun — and much more rewarding than

Rowlands and Maurice Harrison-Gray. trying to hit a moving target with a piece