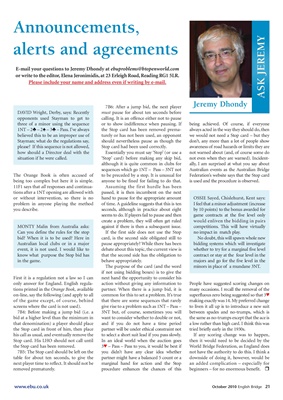 7B6: After a jump bid, the next player Jeremy Dhondy

DAVID Wright, Derby, says: Recently must pause for about ten seconds before

opponents used Stayman to get to calling. It is an offence either not to pause

three of a minor using the sequence or to show indifference when pausing. If being achieved. Of course, if everyone

believed this to be an improper use of turely or has not been used, an opponent we would not need a Stop card – but they

Stayman; what do the regulations say, should nevertheless pause as though the don’t, any more than a lot of people show

please? If this sequence is not allowed, Stop card had been used correctly. awareness of road hazards or limits they are

how should a Director deal with the Essentially you must say ‘Stop’ (or use a not warned about (and, of course some do

situation if he were called. ‘Stop’ card) before making any skip bid, not even when they are warned). Incident-

although it is quite common in clubs for ally, I am surprised at what you say about

The Orange Book is often accused of to be preceded by a stop. It is unusual for Federation’s website says that the Stop card

being too complex but here it is simple. anyone to be fined for failing to do that. is used and the procedure is observed.

tions after a 1NT opening are allowed with passed, it is then incumbent on the next

or without intervention, so there is no hand to pause for the appropriate amount OSSIE Sayed, Chislehurst, Kent says:

problem in anyone playing the method of time. A guideline suggests that this is ten I feel that a minor adjustment (increase

you describe. seconds, although in practice about eight by 10 points) to the bonus awarded for

seems to do. If players fail to pause and then game contracts at the five level only

create a problem, they will often get ruled would enliven the bidding in pairs

MONTY Malin from Australia asks: against if there is then a subsequent issue. competitions. This will have virtually

Can you define the rules for the stop If the first side does not use the Stop no impact in match play.

bid? When it is to be used? Here in card, is the second side obligated still to No doubt, this will spawn whole new

Australian local clubs or in a major pause appropriately? While there has been bidding systems which will investigate

event, it is not used. I would like to debate about this topic, the current view is whether to try for a marginal five level

in the game. behave appropriately. majors and go for the five level in the

The purpose of the card (and the word minors in place of a mundane 3NT.

if not using bidding boxes) is to give the

only answer for England. English regula- action without giving any information to People have suggested scoring changes on

tions printed in the Orange Book, available partner. When there is a jump bid, it is many occasions. I recall the removal of the

on-line, say the following (and apply to all common for this to set a problem. It’s true superfluous zero being suggested so that 3™

of the game except, of course, behind that there are some sequences that rarely making exactly was 14. My preferred change

screens where the card is not used). give rise to a problem such as 1NT – Pass – to liven it all up is to introduce a new suit

7B4: Before making a jump bid (i.e. a 3NT but, of course, sometimes you will between spades and no-trumps, which is

bid at a higher level than the minimum in want to consider whether to double or not, the same as no-trumps except that the ace is

that denomination) a player should place and if you do not have a time period a low rather than high card. I think this was

the Stop card in front of him, then place partner will be under ethical constraint not tried briefly early in the 1930s.

his call as usual, and eventually remove the to select a short suit lead if you pass slowly. If any scoring change was to happen,

Stop card. His LHO should not call until In an ideal world when the auction goes then it would need to be decided by the

the Stop card has been removed. 3™ – Pass – Pass to you, it would be best if World Bridge Federation, as England does

7B5: The Stop card should be left on the you didn’t have any clear idea whether not have the authority to do this. I think a

table for about ten seconds, to give the partner might have a balanced 5 count or a downside of doing it, however, would be

next player time to reflect. It should not be marginal hand for action and the Stop an added complication – especially for

removed prematurely. procedure enhances the chances of this beginners – for no enormous benefit. r