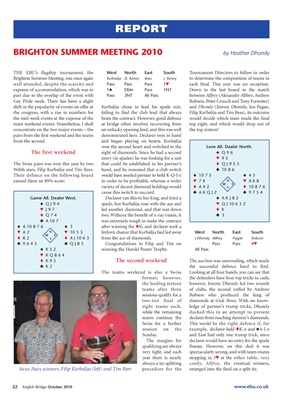 Brighton Summer Meeting, was once again Kurbalija D. Kenny Rees J. Kenny to determine the composition of teams in

well attended, despite the scarcity and Pass Pass Pass 1™ each final. This year was no exception.

expense of accommodation, which was in 1´ Dble Pass 1NT Down to the last board in the match

part due to the overlap of the event with Pass 3NT All Pass between Allfrey (Alexander Allfrey, Andrew

Gay Pride week. There has been a slight Robson, Peter Crouch and Tony Forrester)

shift in the popularity of events on offer at Kurbalija chose to lead his spade suit, and Dhondy (Jeremy Dhondy, Ian Pagan,

the congress, with a rise in numbers for failing to find the club lead that always Filip Kurbalija and Tim Rees), its outcome

the mid-week events at the expense of the beats the contract. However, good defence would decide which team made the final

main weekend events. Nonetheless, I shall at bridge often involves recovering from top eight, and which would drop out of

concentrate on the two major events – the an unlucky opening lead, and this was well the top sixteen!

pairs from the first weekend and the teams demonstrated here. Declarer won in hand

from the second. and began playing on hearts. Kurbalija

won the second heart and switched to the Love All. Dealer North.

The first weekend eight of diamonds. Since he had a second ´ Q96

Welsh stars, Filip Kurbalija and Tim Rees. hand, and he reasoned that a club switch ® 10 8 6

Game All. Dealer West. Declarer ran this to her king, and tried a ´ AKJ82

™ J97 led another diamond, and that was down t K

® A 10 7 was extremely tough to make the contract

t K95 The second weekend The auction was unrevealing, which made

The teams weekend is also a Swiss Looking at all four hands, you can see that

format; however, the defenders have four top tricks to cash;

teams after three of clubs, the second ruffed by Andrew

sessions qualify for a Robson who produced the king of

two-tier final of diamonds at trick three. With no know-

while the remaining ducked this in an attempt to prevent

Swiss for a further This would be the right defence if, for

Sunday. and East had only one trump trick, since

The margins for declarer would have no entry for the spade

qualifying are always finesse. However, on this deal it was

very tight, and each spectacularly wrong, and with team-mates

year there is nearly stopping in 3™ at the other table, very

Swiss Pairs winners, Filip Kurbalija (left) and Tim Rees procedure for the emerged into the final on a split tie.