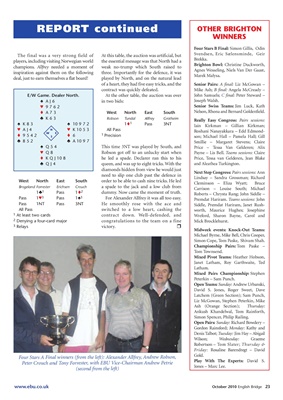 The final was a very strong field of At this table, the auction was artificial, but Svendsen, Eric Sælensminde, Geir

players, including visiting Norwegian world the essential message was that North had a Brekka.

champions. Allfrey needed a moment of weak no-trump which South raised to

inspiration against them on the following three. Importantly for the defence, it was

deal, just to earn themselves a flat board! played by North, and on the natural lead

of a heart, they had five easy tricks, and the Senior Pairs: A final: Liz McGowan –

E/W Game. Dealer North. At the other table, the auction was over John Samuels; C final: Peter Steward –

™ Q8 Robson got off to an unlucky start when Payne – Lis Bell. Teams sessions: Claire

® QJ4 queen, and was up to eight tricks. With the and Aleathea Turkington.

diamonds hidden from view he would just

need to slip one club past the defence in

Brogeland Forrester Erichsen Crouch a spade to the jack and a low club from Carrison – Louise South; Michael

Pass 1™3 Pass 1´3 For Alexander Allfrey it was all too easy. Premdat Hariram. Teams sessions: John

All Pass switched to a low heart, cashing the worth, Maurice Hughes; Josephine

1 At least two cards contract down. Well-defended, and Wreford, Sharon Bayne, Carol and

2 Denying a four-card major congratulations to the team on a fine Mick Brocklehurst.

Play With The Experts: David S.

(second from the left)