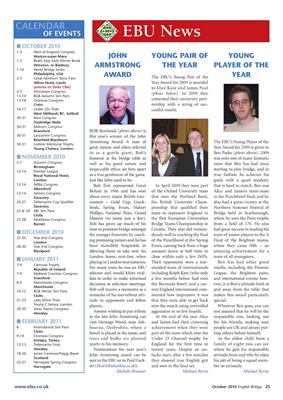 ARMSTRONG THE YEAR PLAYER OF THE

AWARD The EBU’s Young Pair of the YEAR

(entries to Yorks CBA) to Alice Kaye and James Paul

Crete nership with a string of suc-

Bransford BOB Rowlands (photo above) is

30-31 Lancashire Congress this year’s winner of the John

Armstrong Award. A man of The EBU’s Young Player of the

Young Chelsea, London great stature and often referred Year Award for 2009 is given to

impeccable ethics set him apart starting to play bridge, and in

Royal National Hotel, as a true gentleman of the game. true fashion he achieves his

London Just like John used to be. goals with a quiet modesty

12-14 NEBA Congress Bob first represented Great In April 2009 they were part that is hard to match. Ben was

Daventry about every major British tour- that won the Portland Bowl, in the Punchbowl final, and he

27-28 Middlesex Congress Masters (to name just a few). the first European Universities where he won the Pairs trophy

Barnet Bob has given up much of his Bridge Teams Championship in from a field of 170. He also

time to promote bridge amongst Croatia. They also did tremen- had great success in leading his

ing promising juniors and he has of the Punchbowl at the Spring Final of the Brighton teams,

28-30 Year End Congress been incredibly hospitable in Fours, coming back from a huge where they came fifth – an

London home, rent-free, when close within only a few IMPs. team of all youngsters.

n JANUARY 2011 playing in London tournaments. Their opponents were a star- Ben has had other good

Republic of Ireland For many years he was an EBU studded team of internationals results, including the Premier

7-9 Midland Counties Congress selector and would kibitz trial- including Ralph Katz (who only League, the Brighton pairs,

Bransford lists in order to make informed a few months before had won and international events; how-

8-9 Manchester Congress decisions at selection meetings. the Bermuda Bowl) and a cur- ever, it is Ben's attitude both at

21-23 Lady Milne Trials tude to opponents and fellow that they were able to get back special.

Young C helsea, London players. into the match using controlled Wherever Ben goes, you can

Anyone wishing to pay tribute aggression in so few boards. rest assured that he will be the

to the late John Armstrong can At the end of the year Alice responsible one, looking out

n FEBRUARY 2011 visit Heritage Wood, near Ash- and James had their crowning for his friends, making sure

8 International Sim Pairs bourne, Derbyshire, where a achievement when they were people are OK and always put-

Clubs bench is placed in his name, and part of the team which won the ting others before himself.

Antalya, Turkey. trees and bulbs are planted Under 25 Channel trophy for As the eldest child from a

12-13 Tollemache Final yearly in his memory. England for the first time in family of eight you can see

Hinckley Nominations for next year’s twenty years. Despite an un- where he gets his responsible

18-20 Junior Camrose/Peggy Bayer John Armstrong award can be lucky start, after a few matches attitude from and why he takes

Harrogate ett (Paul.h@ukonline.co.uk). and won in the final set. ber so seriously.