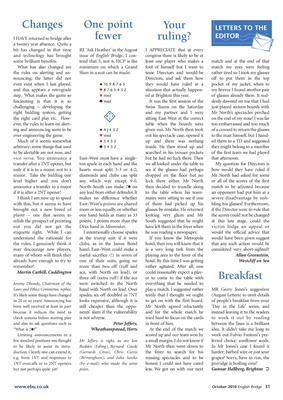 Changes One point Your LETTERS TO THE

I HAVE returned to bridge after fewer ruling? EDITOR

a twenty year absence. Quite a

and technology has brought issue of English Bridge, I con- congress there is likely to be at

some brilliant benefits. tend that 5, not 6, HCP is the least one player who makes a match and at the end of that

the rules on alerting and an- Slam in a suit can be made: tease Directors and would-be rather tired so I took my glasses

nouncing; the latter did not Directors, and ask them how off to put them in the top

step. What makes the game so t Void ed at Brighton this year. of glasses already there. It sud-

right bidding system, getting N and my partner and I were Mr North’s spectacles perched

the right card play etc. How- S sitting East-West at the correct on the end of my nose! I was far

ever, the rules to learn on alert- table when the boards were too embarrassed and too much

ing and announcing seem to be ´ AJ432 given out. Mr North then took of a coward to return the glasses

over-engineering the game. ™ Void out his spectacle case, opened it to the man himself, but I hand-

arbitrary; some things that used ®5432 inside. He then stood up and they might belong to a member

to be alertable are not now, and searched in his trouser pockets of the first team we had played

vice versa. You an nounce a East–West must have a single- but he had no luck there. Then that afternoon.

transfer after a 1NT opener, but ton spade in each hand and the we all looked under the table to My question for Directors is

only if it is to a major, not to a hearts must split 3-3 or 4-2; see if the glasses had perhaps how would they have ruled if

minor. Take the bidding one diamonds and clubs can split dropped on the floor but no Mr North had asked for some

level higher and you don’t any which way except 9-0. luck there either. Mr North or all of the scores of the first

if it is after a 2NT opener! any lead from either defender. It to the table where his team- an opponent had put him at a

with this, but it seems to have East-West’s points are shared of them had picked up his bling his glasses? Furthermore,

brought out a new breed of more or less equally, or whether glasses by mistake. He returned if the Director were to rule that

relish the prospect of pointing points, 2 points more than the South suggested that he might at this late stage, could the

out you did not get the Drax hand in Moonraker. have left them in the foyer when victim lodge an appeal or

etiquette right. While I can I intentionally choose spades he was reading a newspaper. would the official advice that

understand the rationale for as the trump suit: if it were If you know the Metropole would have been given suggest

the rules, I genuinely think it clubs, as in the James Bond hotel, then you will know that it that any such action would be

may discourage new players, hand, East–West could make a is a very long trek from the considered very short-sighted?

many of whom will think they useful sacrifice (!) in seven of playing area to the foyer of the Allan Greenstein,

already have enough to try to one of their suits, going no hotel. By this time I was getting Westcliff on Sea

remember! more than two off (ruff and rather agitated. After all, one

Martin Cutbill, Cuddington ace, with North on lead), or could reasonably expect a play-

Jeremy Dhondy, Chairman of the were switched to the North everything that he needed to

Laws and Ethics Committee, replies: hand with North on lead. Over play a match. I suggested rather MR Gerry Jones’s suggestion

It’s likely some things have changed spades, six off doubled in 7NT testily that I thought we ought (August Letters) to omit details

in 20 or so years! Announcing has looks expensive, although it is to get on with the first board. of people’s breakfast from your

been well received at least in part still cheaper than the oppo- Mr North agreed reluctantly ‘Day in the Life’ series, and

check systems before starting play is not adverse. tried hard to focus on the cards to work it out by reading

and also to ask questions such as Peter Jeffery, in front of him. between the lines is a brilliant

“What is 2´?” Wheathampstead, Herts At the end of the match we idea. It didn’t take me long to

few standard positions was thought Mr Jeffery is right, as are Ian a small margin. I do not know if ferred choice: sunflower seeds.

to be likely to assist its intro- Budden (Ealing), Bernard Coode Mr North then went down to In Mr Jones’s case I found it

duction. Clearly one can extend it, (Gerrards Cross), Chris Curtis the foyer to search for his harder: barbed wire or just sour

e.g. from 1NT and responses to (Birmingham), and Felix Sawko missing spectacles and to be grapes? Sorry, have to run, the

1NT overcalls or to 2NT openers (by e-mail) who made the same honest I could not have cared porridge is boiling over!

but not perhaps quite yet! point. less. We got on with our next Gunnar Hallberg, Brighton Ú