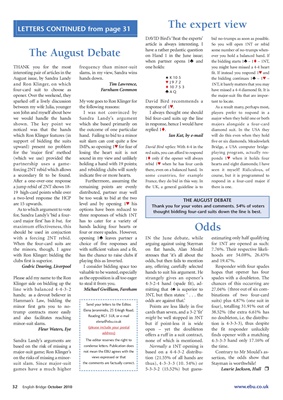 article is always interesting. I So you will open 1NT or rebid

have a rather pedantic question

The August Debate on Hand 1 in the June issue;

some number of no-trumps when-

ever you hold a balanced hand. If

THANK you for the most frequency than minor-suit one holds: you might have missed a 4-4 heart

interesting pair of articles in the slams, in my view, Sandra wins fit. If instead you respond 1™ and

and Ron Klinger, on which Tim Lawrence, 1NT, it barely matters that you may

four-card suit to choose as Farnham Common ®AQ have missed a 4-4 diamond fit. It is

opener. Over the weekend, they the major-suit fits that are impor-

sparked off a lively discussion My vote goes to Ron Klinger for David Bird recommends a tant to locate.

between my wife Julia, younger the following reasons: response of 1™. As a result many, perhaps most,

shown. The key point we which she based primarily on in response, hence I would have majors alongside a four-card

noticed was that the hands the outcome of one particular replied 1t. diamond suit. In the USA they

which Ron Klinger features (in hand. Failing to bid to a minor Ian Kat, by e-mail will do this even when they hold

support of bidding the suits suit slam can cost quite a few five or six diamonds. Meadowlark

upward) present no problem IMPs, so opening 1™ for fear of David Bird replies: With 4-4 in the Bridge, a USA computer bridge-

for the ‘major first’ method losing the heart suit is not red suits, you can afford to respond playing pro gram, actually res -

partnership uses a game- holding a hand with 19 points; rebid 1™ when he has four cards hearts and eight diamonds; I have

forcing 2NT rebid which allows and rebidding clubs will surely there, even on a balanced hand. In seen it myself! Ridiculous, of

a secondary fit to be found. indicate five or more hearts. some countries, for example course, but it is programmed to

After a one-over-one response Furthermore, assuming the France, they do bid in this way. In respond in a four-card major if

a jump rebid of 2NT shows 18- remaining points are evenly the UK, a general guideline is to there is one.

19 high-card points while over distributed, partner may well

are 15 upwards. level and by opening 1™ his Thank you for your votes and comments. 54% of voters

As to which argument to vote options have been reduced to thought bidding four-card suits down the line is best.

for, Sandra Landy’s ‘bid a four- three responses of which 1NT

card major first’ has it but, for has to cater for a variety of

should be used in conjuction

four or more spades. However,

with a forcing 2NT rebid. opening 1® leaves partner a IN the June debate, while estimating only half qualifying

When the four-card suits are choice of five responses and arguing against using Stayman for 1NT are opened as such:

the minors, though, I agree with sufficient values and a fit, on flat hands, Alan Mould 7.76%. Their respective likeli-

clubs first is superior. playing this as Inverted. odds, but then fails to mention and 19.47%.

valuable to be wasted, especially hands to suit his argument. He hopes that opener has four

Please add my name to the Ron as the opposition is all too eager strangely gives an opener’s spades with a doubleton. The

Klinger side on bidding up the to steal it from you. 4-3-2-4 hand (spade fit), ad- chances of this occurring are

hands; as a devout believer in 3NT, but then states: ‘ . . . the binations of two four-card

Hamman’s Law, bidding the odds are against that.’ suits) plus 4.87% (one suit in

minor first gets you to no- Points are less likely in five four), totalling 31.91% out of

and also facilitates reaching might be well stopped in 3NT no doubleton, i.e. the distribu-

offers a ruff in a suit contract, finds opener with a matching

Sandra Landy’s arguments are The editor reserves the right to none of which is mentioned. 4-3-3-3 hand only 17.16% of

based on the risk of missing a condense letters. Publication does Normally a 1NT opening is the time.

major-suit game; Ron Klinger’s not mean the EBU agrees with the based on a 4-4-3-2 distribu- Contrary to Mr Mould’s as-

on the risks of missing a minor- views expressed or that tion (21.55% of all hands are sertion, the odds show that