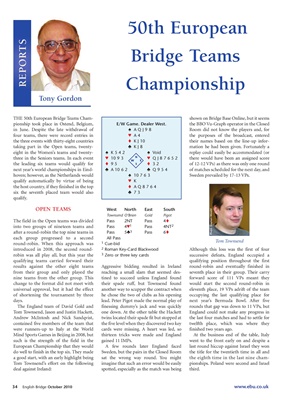 THE 50th European Bridge Teams Cham- shown on Bridge Base Online, but it seems

in June. Despite the late withdrawal of ´ AQJ98 Room did not know the players and, for

four teams, there were record entries in ™ A4 the purposes of the broadcast, entered

taking part in the Open teams, twenty- ® KJ8 mation he had been given. Fortunately a

™ QJ87652 there would have been an assigned score

qualify automatically by virtue of being ™ K

the host country, if they finished in the top t AQ8764

each group progressed to a second All Pass

round-robin. When this approach was Cue-bid

introduced in 2008, the second round- 2 Roman Key-Card Blackwood Although this loss was the first of four

robin was all play all, but this year the 3 Zero or three key cards successive defeats, England occupied a

qualifying teams carried forward their qualifying position throughout the first

from their group and only played the reaching a small slam that seemed des- seventh place in their group. Their carry

nine teams from the other group. This tined to succeed unless England found forward score of 111 VPs meant they

change to the format did not meet with their spade ruff, but Townsend found would start the second round-robin in

universal approval, but it had the effect another way to scupper the contract when eleventh place, 19 VPs adrift of the team

days. lead. Peter Pigot made the normal play of next year’s Bermuda Bowl. After five

The England team of David Gold and finessing dummy’s jack and was quickly rounds that gap was down to 11 VPs, but

Tom Townsend, Jason and Justin Hackett, one down. At the other table the Hackett England could not make any progress in

Andrew McIntosh and Nick Sandqvist, twins located their spade fit but stopped at the last four matches and had to settle for

contained five members of the team that the five level when they discovered two key twelfth place, which was where they

were runners-up to Italy at the World cards were missing. A heart was led, so finished two years ago.

Mind Sports Games in Beijing in 2008, but thirteen tricks were made and England At the business end of the table, Italy

such is the strength of the field in the gained 11 IMPs. went to the front early on and despite a

do well to finish in the top six. They made Sweden, but the pairs in the Closed Room the title for the twentieth time in all and

a good start, with an early highlight being sat the wrong way round. You might the eighth time in the last nine cham -

Tom Townsend’s effort on the following imagine that such an error would be easily pionships. Poland were second and Israel

deal against Ireland: spotted, especially as the match was being third.