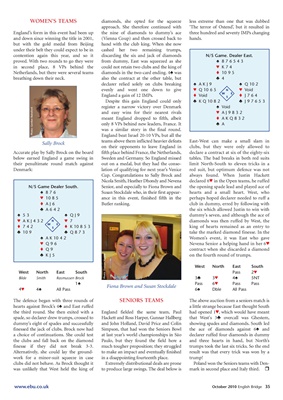 WOMEN’S TEAMS diamonds, she opted for the squeeze less extreme than one that was dubbed

approach. She therefore continued with ‘The terror of Ostend’, but it resulted in

and down since winning the title in 2001, (Vienna Coup) and then crossed back to hands.

but with the gold medal from Beijing hand with the club king. When she now

under their belt they could expect to be in cashed her two remaining trumps,

contention again this year, and so it discarding the six and jack of diamonds N/S Game. Dealer East.

proved. With two rounds to go they were from dummy, East was squeezed as she ´ 876543

in second place, 8 VPs behind the could not retain two clubs and the king of ™ K74

Netherlands, but there were several teams diamonds in the two-card ending. 4´ was t 10 9 5

breathing down their neck. also the contract at the other table, but ® 4

and easy wins for their nearest rivals ™ AJ9832

only 8 VPs behind new leaders, France. It ® A

was a similar story in the final round.

on their opponents to leave England in clubs, but they were only allowed to

Accurate play by Sally Brock on the board fifth place behind France, the Netherlands, declare a contract at six of the eighty-six

below earned England a game swing in Sweden and Germany. So England missed tables. The bad breaks in both red suits

their penultimate round match against out on a medal, but they had the conso- limit North-South to eleven tricks in a

Denmark: lation of qualifying for next year’s Venice red suit, but optimum defence was not

Nicola Smith, Heather Dhondy and Nevena declared 6™ in the Open teams, he ruffed

N/S Game Dealer South. Senior, and especially to Fiona Brown and the opening spade lead and played ace of

´ 876 Susan Stockdale who, in their first appear- hearts and a small heart. West, who

™ 10 8 5 ance in this event, finished fifth in the perhaps hoped declarer needed to ruff a

® A642 the six which allowed Justin to win with

t Q9 contract when she discarded a diamond

® KJ5 on the fourth round of trumps.

the third round. She then exited with a England fielded the same team, Paul had opened 1™, which would have meant

finessed the jack of clubs. Brock now had Simpson, that had won the Seniors Bowl the ace of diamonds against 6´ and

a choice of continuations. She could test at last year’s world championships in São declarer ruffed four diamonds in dummy

the clubs and fall back on the diamond Paulo, but they found the field here a and three hearts in hand, but North’s

finesse if they did not break 3-3. much tougher proposition; they struggled trumps took the last six tricks. So the end

Alternatively, she could lay the ground- to make an impact and eventually finished result was that every trick was won by a

work for a minor-suit squeeze in case in a disappointing fourteenth place. trump!

clubs did not behave. As Brock thought it Extremely distributional deals are prone Poland won the Seniors teams with Den-

was unlikely that West held the king of to produce large swings. The deal below is mark in second place and Italy third. r