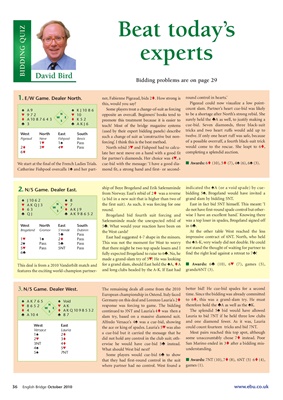 this, would you say? Pigeaud could now visualize a low point-

™ 972 N ™ 10 opposite an overcall. Beginners’ books tend to to be a shortage after North’s strong rebid. She

such a change of suit as ‘constructive but non- twelve. If only one heart ruff was safe, because

1™ 1´ Pass forcing’. I think this is the best method. of a possible overruff, a fourth black-suit trick

6t late her next move on a hand with a good fit completing a splendid auction.

for partner’s diamonds. Her choice was 4™, a

Catherine Fishpool overcalls 1´ and her part- mond fit, a strong hand and first- or second-

2. N/S Game. Dealer East. from Norway. East’s rebid of 2t was a reverse bidding 5´, Brogeland would have invited a

t 63 S t AKJ9 round. do not have first-round spade control but other-

® QJ ® AK98652 Brogeland bid fourth suit forcing and wise I have an excellent hand.’ Knowing there

Sælensminde made the unexpected rebid of was a top loser in spades, Brogeland signed off

West North East South 5®. What would your reaction have been on in 6®.

East had suggested 4-7 shape in the minors. impressive contract of 6NT. North, who held

2´ Pass 5® Pass This was not the moment for West to worry the ´A-K, very wisely did not double. He could

6® fully expected Brogeland to raise to 6®. No, he find the right lead against a retreat to 7®!

made a grand-slam try of 5™! He was looking

features the exciting world-champion partner- and long clubs headed by the A-K. If East had grands/6NT (3).

3. N/S Game. Dealer West. The remaining deals all come from the 2010 better bid! He cue-bid spades for a second

European championship in Ostend. Italy faced time. Since the bidding was already committed

™ AK response was forcing to game. The bidding therefore hold the ®A as well as the ´K.

Alfredo Versace’s 4´ was a cue-bid, showing and one diamond fewer. As it was, Lauria

the ace or king of spades. Lauria’s 5™ was also

1´ 2t a cue-bid but it carried the message that he Most pairs reached this top spot, although

2™ 3t did not hold any control in the club suit; oth- some unaccountably chose 7t instead. Poor

3NT 4t erwise he would have cue-bid 5® instead. San Marino ended in 3t after a bidding mis-

4´ 5™ What should West bid next? understanding.

Some players would cue-bid 6® to show

where partner had no control. West found a games (1).