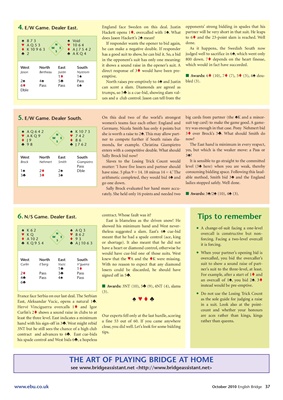 Hackett opens 1t, overcalled with 1´. What partner will be very short in that suit. He leaps

does Jason Hackett’s 2´ mean? to 6t and the 23-point slam is reached. Well

If responder wants the opener to bid again, done.

t AJ7542 he can make a negative double. If responder As it happens, the Swedish South now

in the opponent’s suit has only one meaning: 800 down. 7t depends on the heart finesse,

it shows a sound raise in the opener’s suit. A which would in fact have succeeded.

6t Pass Pass 6´ can scent a slam. Diamonds are agreed as

ues and a club control. Jason can tell from the

5. E/W Game. Dealer South. On this deal two of the world’s strongest big cards from partner (the ´K and a minor-

women’s teams face each other: England and suit top card) to make the game good. A game-

Germany. Nicola Smith has only 4 points but try was enough in that case. Pony Nehmert bid

® 98 ® J762 monds, for example. Christina Giampietro The East hand is minimum in every respect,

enters with a competitive double. What should yes, but which is the weaker move: a Pass or

Pass mutter: ‘I have five losers and partner should level (3´ here) when you are weak, thereby

arithmetic completed, they would bid 4´ and able method, Smith bid 3´ and the England

contract. Whose fault was it?

East is blameless as the driven snow! He

´ AQ3 theless suggested a slam. East’s 4´ cue-bid • overcall is constructive a but non-

t 93 meant that he had a spade control (ace, king forcing. Facing a two-level overcall

have a heart or diamond control, otherwise he

would have cue-bid one of those suits. West • overcalled, you bid the overcaller’s

When your partner’s opening bid is

West North East South knew that the ™A and the tK were missing.

1® 1t losers could be discarded, he should have ner’s suit to the three-level, at least.

not use the Count

East, Aleksandar Vucic, opens a natural 1®. ´ ™t® as for judging

in a suit. Look also at the point-

count and whether your honours

Curlin’s 2t shows a sound raise in clubs to at

Our experts fell only at the last hurdle, scoring are aces rather than kings, kings

a fine 53 out of 60. If you came anywhere rather than queens.

3NT but he still sees the chance of a high club close, you did well. Let’s look for some bidding

his spade control and West bids 6®, a hopeless

THE ART OF PLAYING BRIDGE AT HOME