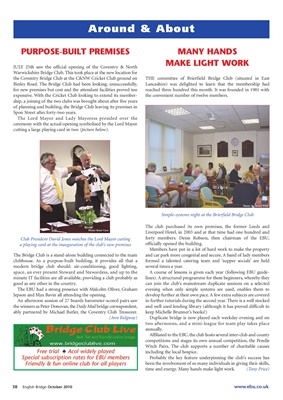 JULY 25th saw the official opening of the Coventry & North

Warwickshire Bridge Club. This took place at the new location for

Binley Road. The Bridge Club had been looking, unsuccessfully, Lancashire) was delighted to learn that the membership had

for new premises but cost and the attendant facilities proved too reached three hundred this month. It was founded in 1981 with

expensive. With the Cricket Club looking to extend its member- the convenient number of twelve members.

ship, a joining of the two clubs was brought about after five years

of planning and building, the Bridge Club leaving its premises in

The Lord Mayor and Lady Mayoress presided over the

ceremony with the actual opening symbolised by the Lord Mayor

cutting a large playing card in two (picture below).

The club purchased its own premises, the former Leeds and

Liverpool Hotel, in 2003 and at that time had one hundred and

a playing card at the inauguration of the club’s new premises officially opened the building.

The Bridge Club is a stand-alone building connected to the main and car park more congenial and secure. A band of lady members

clubhouse. As a purpose-built building, it provides all that a formed a talented catering team and ‘supper socials’ are held

space, an ever present Steward and Stewardess, and up to the A course of lessons is given each year (following EBU guide-

minute IT facilities are all available, providing a club probably as lines). A structured programme for these beginners, whereby they

good as any other in the country. can join the club’s mainstream duplicate sessions on a selected

The EBU had a strong presence with Malcolm Oliver, Graham evening when only simple systems are used, enables them to

Jepson and Max Bavin all attending the opening. develop further at their own pace. A few extra subjects are covered

An afternoon session of 27 boards barometer-scored pairs saw in further tutorials during the second year. There is a well stocked

the winners as Peter Donovan, the Daily Mail bridge correspondent, and well used lending library (although it has proved difficult to

two afternoons, and a mini-league for team play takes place

Affiliated to the EBU, the club hosts several inter-club and county

competitions and stages its own annual competition, the Pendle

Witch Pairs. The club supports a number of charitable causes

Friendly & fun online club for all players been the involvement of so many individuals in giving their skills,