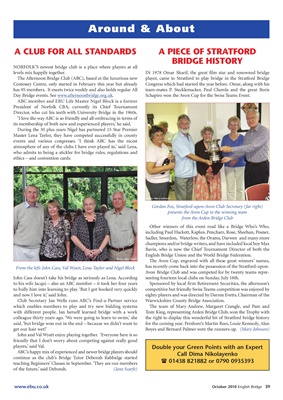 A CLUB FOR ALL STANDARDS A PIECE OF STRATFORD

The Afternoon Bridge Club (ABC), based at the luxurious new player, came to Stratford to play bridge in the Stratford Bridge

Costessey Centre, only started in February this year but already Congress which had started the year before. Omar, along with his

has 95 members. It meets twice weekly and also holds regular All team-mates P. Stecklemacker, Paul Chemla and the great Boris

Director, who cut his teeth with University Bridge in the 1960s.

its membership of both new and experienced players,’ he said.

During the 30 plus years Nigel has partnered 15 Star Premier

Master Lena Taylor, they have competed successfully in county

events and various congresses. ‘I think ABC has the nicest

atmosphere of any of the clubs I have ever played in,’ said Lena,

who admits to being a stickler for bridge rules, regulations and

presents the Avon Cup to the winning team

from the Arden Bridge Club

Other winners of this event read like a Bridge Who’s Who,

Sadler, Smerdon, Waterlow, the Orams, Darwen and many more

champions and/or bridge writers, and have included local boy Max

Bavin, who is now the Chief Tournament Director of both the

The Avon Cup, engraved with all these great winners’ names,

From the left: John Cass, Val Wyatt, Lena Taylor and Nigel Block has recently come back into the possession of the Stratford-upon-

Avon Bridge Club and was competed for by twenty teams repre-

to his wife Jacqui – also an ABC member – it took her four years Sponsored by local firm Retirement Securities, the afternoon’s

to bully him into learning to play. ‘But I got hooked very quickly competitive but friendly Swiss Teams competition was enjoyed by

and now I love it,’ said John. eighty players and was directed by Darren Evetts, Chairman of the

which enables members to play and try new bidding systems The team of Mary Andrew, Margaret Crangle, and Pam and

with different people. Jan herself learned bridge with a work Tony King, representing Arden Bridge Club, won the Trophy with

colleague thirty years ago. ‘We were going to learn to swim,’ she the right to display this wonderful bit of Stratford bridge history

said, ‘but bridge won out in the end – because we didn’t want to for the coming year. Pershore’s Martin Rees, Louie Kennedy, Alan

get our hair wet!’ Boyes and Bernard Palmer were the runners-up. (Mary Johnson)

John and Val Wyatt enjoy playing together. ‘Everyone here is so

friendly that I don’t worry about competing against really good

players,’ said Val. Double your Green Points with an Expert

ABC’s happy mix of experienced and newer bridge players should