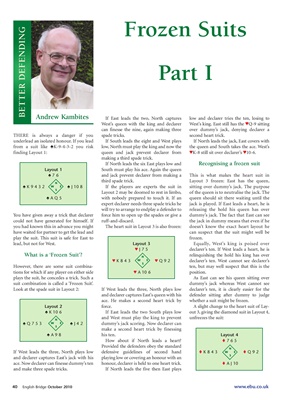 West’s queen with the king and declarer West’s king. East still has the ™Q-9 sitting

can finesse the nine, again making three over dummy’s jack, denying declarer a

THERE is always a danger if you spade tricks. second heart trick.

underlead an isolated honour. If you lead If South leads the eight and West plays If North leads the jack, East covers with

from a suit like ´K-9-4-3-2 you risk low, North must play the king and now the the queen and South takes the ace. West’s

Layout 1 South must play his ace. Again the queen

Layout 2 may be doomed to rest in limbo, of the queen is to neutralise the jack. The

´AQ5 with nobody prepared to touch it. If an queen should sit there waiting until the

expert declarer needs three spade tricks he jack is played. If East leads a heart, he is

You have given away a trick that declarer force him to open up the spades or give a dummy’s jack. The fact that East can see

could not have generated for himself. If ruff-and-discard. the jack in dummy means that even if he

you had known this in advance you might The heart suit in Layout 3 is also frozen: doesn’t know the exact heart layout he

play the suit. This suit is safe for East to frozen.

lead, but not for West. Layout 3 Equally, West’s king is poised over

What is a ‘Frozen Suit’? N relinquishing the hold his king has over

However, there are some suit combina- ten, but may well suspect that this is the

tions for which if any player on either side ™ A 10 6 position.

plays the suit, he concedes a trick. Such a As East can see his queen sitting over

Look at the spade suit in Layout 2: If West leads the three, North plays low declarer’s ten, it is clearly easier for the

ace. He makes a second heart trick by whether a suit might be frozen.

Layout 2 force. A slight change to the heart suit of Lay-

and West must play the king to prevent unfreezes the suit:

How about if North leads a heart? t765

and make three spade tricks. If North leads the five then East plays