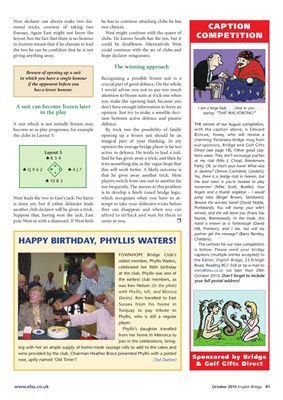 layout, but the fact that there is no honour clubs. He knows South has the ten, but it COMPETITION

in dummy means that if he chooses to lead could be doubleton. Alternatively West

giving anything away. hope declarer misguesses.

Beware of opening up a suit

if the opponent before you crucial part of good defence. On the whole

has a lower honour. I would advise you not to pay too much

attention to frozen suits at trick one when

you make the opening lead, because you

A suit can become frozen later don’t have enough information to form an I see a large lady . . . close to you . . .

in the play opinion. Just try to make a sensible deci- saying: “THAT WAS FORCING!”

sion between active defence and passive

A suit which is not initially frozen, may defence. THE winner of our August competition,

become so as play progresses, for example By trick two the possibility of fatally with the cap tion above, is Edward

the clubs in Layout 5: opening up a frozen suit should be an Blincoe, Fowey, who will receive a

integral part of your thinking. In my charming Victoriana bridge mug from

opinion the average bridge player is far too our sponsors, Bridge and Golf Gifts

Layout 5 active in defence. He tends to lead a suit,

tions were: They don’t encourage psyches

®K54 find he has given away a trick, and then he

tries something else in the vague hope that Park); OK, so that's your hand. What was

that he gives away another trick. Most Yes, there is a bridge club in heaven, but

too frequently. The answer to this problem tomorrow! (Mike Scott, Bootle); Four

is to develop a finely tuned bridge logic, fingers and a thumb singleton – I would

West leads the two to East’s jack. No harm which recognises when you have to at- jump raise (Roger Brown, Sandown);

is done yet, but if either defender leads tempt to take your defensive tricks before Beware the ace-less hand! (David Noble,

another club declarer will be given a trick. they can disappear, and when you can Ponteland); You will trump your wife’s

winner, and she will leave you (Frans Vas

Suppose that, having won the jack, East afford to sit back and wait for them to

Nunes, Brentwood); In the trade, this

puts West in with a diamond. If West feels come to you. r hand is known as a Yarborough (David

Hill, Prenton); and I see, but will my

partner get the message? (Barry Ransley,

celebrated her 96th birthday Road, Reading RG1 5LR or by e-mail to

at the club. Phyllis was one of

October 2010. Don’t forget to include

the earliest club members, as your full postal address!

was Ken Nelson (in the photo

with Phyllis, left, and Monica

Sussex from his home in

Torquay to pay tribute to

Phyllis, who is still a regular

from her home in Menorca to

join in the celebrations, bring-

wine provided by the club. Chairman Heather Brace presented Phyllis with a potted