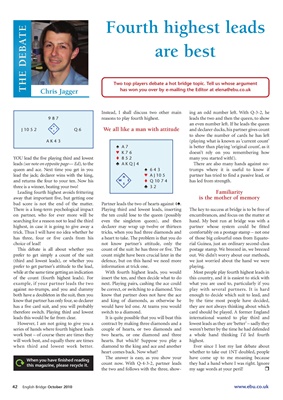 Instead, I shall discuss two other main ing an odd number left. With Q-3-2, he

987 reasons to play fourth highest. leads the two and then the queen, to show

an even number left. If he leads the queen

Q6 We all like a man with attitude and declarer ducks, his partner gives count

to show the number of cards he has left

AK43 (playing what is known as ‘current count’

´ A7 is better than playing ‘original count’, as it

™ K76 doesn’t rely on you remembering how

YOU lead the five playing third and lowest t 852 many you started with!).

leads (see note on opposite page— Ed), to the ® AKQJ4 There are also many hands against no-

queen and ace. Next time you get in you ´ 643 trumps where it is useful to know if

lead the jack; declarer wins with the king, N ™ A J 10 5 partner has tried to find a passive lead, or

away that important five, but getting one is the mother of memory

bad score is not the end of the matter. Partner leads the two of hearts against 4´.

There is a long-term psychological impact Playing third and lowest leads, inserting The key to success at bridge is to be free of

on partner, who for ever more will be the ten could lose to the queen (possibly encumbrances, and focus on the matter at

searching for a reason not to lead the third even the singleton queen), and then hand. My best run at bridge was with a

highest, in case it is going to give away a declarer may wrap up twelve or thirteen partner whose system could be fitted

trick. Thus I will have no idea whether he tricks, when you had three diamonds and comfortably on a postage stamp – not one

has three, four or five cards from his a heart to take. The problem is that you do of those big colourful ones from Equato-

choice of lead! not know partner’s attitude, only the rial Guinea, just an ordinary second-class

This debate is all about whether you count of the suit: he has three or five. The postage stamp. We breezed in, we breezed

prefer to get simply a count of the suit count might have been crucial later in the out. We didn’t worry about our methods,

(third and lowest leads), or whether you defence, but on this hand we need more we just worried about the hand we were

prefer to get partner’s attitude to the lead, information at trick one. playing.

of the count (fourth highest leads). For insert the ten, and then decide what to do this country, and it is easiest to stick with

example, if your partner leads the two next. Playing pairs, cashing the ace could what you are used to, particularly if you

against no-trumps, and you and dummy be correct, or switching to a diamond. You play with several partners. It is hard

both have a doubleton in the suit, then you know that partner does not have the ace enough to decide which suit to lead, and

know that partner has only four, so declarer and king of diamonds, as otherwise he by the time most people have decided,

has a five card suit, and you will probably would have led one. At teams you would they are not always thinking about which

therefore switch. Playing third and lowest switch to a diamond. card should be played. A former England

leads this would be far from clear. It is quite possible that you will beat this international wanted to play third and

However, I am not going to give you a contract by making three diamonds and a lowest leads as they are ‘better’ – sadly they

series of hands where fourth highest leads couple of hearts, or two diamonds and weren’t better by the time he had defended

work best – of course there are times they two hearts, or one diamond and three a whole hand thinking I’d led fourth

will work best, and equally there are times hearts. But which? Suppose you play a highest.

when third and lowest work better. diamond to the king and ace and another Ever since I lost my last debate about

heart comes back. Now what? whether to take out 1NT doubled, people

The answer is easy, as you show your have come up to me moaning because

this magazine, please recycle it. count now. With Q-4-3-2, partner leads they had a hand where I was right. Ignore

the two and follows with the three, show- my sage words at your peril! r