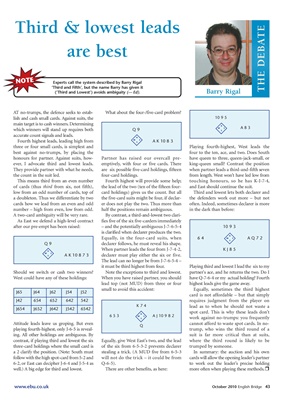 ‘Third and Fifth’, but the name Barry has given it

AT no-trumps, the defence seeks to estab- What about the four-/five-card problem?

which winners will stand up requires both Q9 S

three or four small cards, is simplest and Playing fourth-highest, West leads the

best against no-trumps, by placing the four to the ten, ace, and two. Does South

honours for partner. Against suits, how- Partner has raised our overcall pre- have queen to three, queen-jack-small, or

ever, I advocate third and lowest leads. emptively, with four or five cards. There king-queen small? Contrast the position

They provide partner with what he needs, are six possible five-card holdings, fifteen when partner leads a third-and-fifth seven

the count in the suit led. four-card holdings. from length. West won’t have led low from

This means third from an even number Fourth highest will provide some help; touching honours, so he has K-J-7-4,

of cards (thus third from six, not fifth), the lead of the two (ten of the fifteen four- and East should continue the suit.

low from an odd number of cards, top of card holdings) gives us the count. But all Third and lowest lets both declarer and

a doubleton. Thus we differentiate by two the five-card suits might be four, if declar- the defenders work out more – but not

cards how we lead from an even and odd er does not play the two. Thus more than often. Indeed, sometimes declarer is more

number – high from even, low from odd. half the positions remain ambiguous. in the dark than before:

A two-card ambiguity will be very rare. By contrast, a third-and-lowest two clari-

is clarified when declarer produces the two.

Equally, in the four-card suits, when 64 W

Q9 declarer follows, he must reveal his shape.

it must be third highest from four. Playing third and lowest I lead the six to my

Should we switch or cash two winners? Note the exceptions to third and lowest. partner's ace, and he returns the two. Do I

West could have any of these holdings: When you have raised partner, you should have Q-7-6-4 or my actual holding? Fourth

lead top (not MUD) from three or four highest leads give the game away.

small to avoid this accident: Equally, sometimes the third highest

card is not affordable – but that simply

K74 lead as to when he should not waste a

spot card. This is why these leads don’t

S work against no-trumps: you frequently

Attitude leads leave us groping. But even Q

cannot afford to waste spot cards. In no-

playing fourth-highest, only J-6-5 is reveal- trump, who wins the third round of a

ing. All other holdings are ambiguous. By suit is far more critical than at suits,

contrast, if playing third and lowest the six Equally, give West East’s two, and the lead where the third round is likely to be

three-card holdings where the small card is of the six from 6-5-3-2 prevents declarer trumped by someone.

a 2 clarify the position. (Note: South must stealing a trick. (A MUD five from 6-5-3 In summary: the auction and his own

well.) A big edge for third and lowest. There are other benefits, as here: more often when playing these methods. r