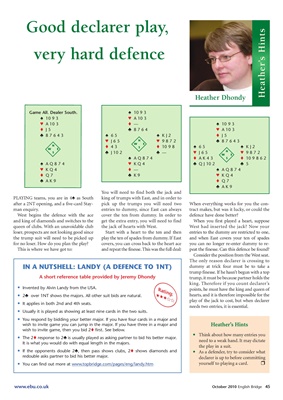 You will need to find both the jack and

PLAYING teams, you are in 4´ as South king of trumps with East, and in order to

after a 2NT opening, and a five-card Stay- pick up the trumps you will need two When everything works for you the con-

man enquiry. entries to dummy, since East can always tract makes, but was it lucky, or could the

West begins the defence with the ace cover the ten from dummy. In order to defence have done better?

and king of diamonds and switches to the get the extra entry, you will need to find When you first played a heart, suppose

queen of clubs. With an unavoidable club the jack of hearts with West. West had inserted the jack? Now your

loser, prospects are not looking good since Start with a heart to the ten and then entries to the dummy are restricted to one,

the trump suit will need to be picked up play the ten of spades from dummy. If East and when East covers your ten of spades

for no loser. How do you plan the play? covers, you can cross back to the heart ace you can no longer re-enter dummy to re-

Consider the position from the West seat.

The only reason declarer is crossing to

IN A NUTSHELL: LANDY (A DEFENCE TO 1NT) dummy at trick four must be to take a

trump finesse. If he hasn’t begun with a top

A short reference table provided by Jeremy Dhondy trump, it must be because partner holds the

king. Therefore if you count declarer’s

• Invented by Alvin Landy from the USA. Rati

points, he must have the king and queen of

• 2® over 1NT shows the majors. All other suit bids are natural. HH g: hearts, and it is therefore impossible for the

H play of the jack to cost, but when declarer

needs two entries, it is essential.

• Usually it is played as showing at least nine cards in the two suits.

• You respond by bidding your better major. If you have four cards in a major and

wish to invite game you can jump in the major. If you have three in a major and Heather’s Hints

wish to invite game, then you bid 2t first. See below.

• The 2t response to 2® is usually played as asking partner to bid his better major. • Think about how many entries you

need to a weak hand. It may dictate

It is what you would do with equal length in the majors.

the play in a suit.

• If the opponents double 2®, then pass shows clubs, 2t shows diamonds and

• As a defender, try to consider what

declarer is up to before committing

• You can find out more at www.topbridge.com/pages/eng/landy.htm yourself to playing a card. r