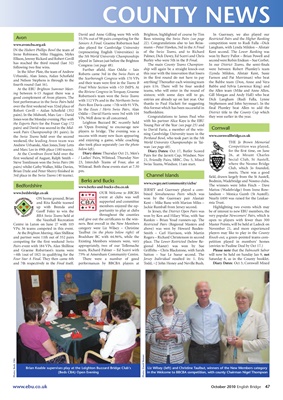 David and Anne Gilling were 9th with Brighton, highlighted of course by Tim In Guernsey, we also played our

Avon 55.5% out of 98 pairs competing for the Rees winning the Swiss Pairs (see page Restricted Pairs and the Higher Ranking

IN the Hubert Phillips Bowl the team of of the Swiss Teams, and to Richard Kent second. The Lower Ranking was

Ellison, Jeremy Rickard and Robert Covill Burley who were 5th in the B Final. second were Robin Endean – Sue Corbet.

played in Taiwan just before the Brighton

has reached the third round (last 32) The main County Teams Champion- In our District Teams, the semi-finals

following two fine wins. ship will again be a straight knock-out were between Robert Plumley’s team

In the Silver Plate, the team of Andrew this year with the innovation that losers (Lynda Mildon, Alistair Kent, Susie

Roberts came 3rd in the Swiss Pairs at

Urbanski, Alan Jones, Aidan Schofield in the first round do not have to pay Farnon and Pat Merriman) who beat

and their team were first in the Teams B anything! Thereafter each winning team the Babbe team (Don, Anne and Vera

fourth round (last 16). pays £16. There will be four seeded Babbe and Sylvia Lawrence King) and

At the EBU Brighton Summer Meet- Final White Section with +53 IMPS. At

the Riviera Congress in Torquay, Graeme teams, who will enter in the round of the Allen team (Mike and Anne Allen,

ing between 6-15 August there was a sixteen; with some days still to go, Gill Morgan and Andy Hall) who beat

with 112 VPs and in the Northants Swiss entries are already up on last year. Our Dick Langham (Rudi Falla, Lynne

best performance in the Swiss Pairs held thanks to Paul Hackett for suggesting Stephenson and John Seymour). In the

over the first weekend was 32nd place of Pairs Ron Davis came =7th with 91 VPs.

In the Essex / Herts Swiss Pairs, Alan this format which has been successful in final Plumley beat Allen to add the

VPs. Well done to all concerned. Congratulations to James Paul who they won earlier in the year.

pairs) and David was second in the Mid- to David Faria, a member of the win- Cornwall

week Pairs Championship (81 pairs). In players to bridge. The evening was a

ning Cambridge University team in the

the Swiss Teams held over the second success with many new faces appearing www.cornwallbridge.co.uk

Portland Bowl, who took part in the 5th

weekend, the leading Avon team was and enjoying a game, while coaching

At the Cwmbran Event held over the Diary dates: Thursday Oct 21, Men’s 26, at Mount Charles

pairs) whilst Cathy Walker, Mike Davies, Wilstead. Both these events start at 7.30 Club, which Jo founded,

Brian Dyde and Peter Sherry finished in pm. meets. There was a good

ON home ground, Brian event at clubs was well won by the Guernsey pair Alastair Nearly £400 was raised for the Leukae-

up with Brenda and members enjoyed the op- Jackie Rumball from Jersey second. Highlighting two events which may

Geoff Foley to win the portunity to play at clubs In Jersey, the District Open Pairs was be of interest to new EBU members, the

BBA Swiss Teams held at throughout the counties won by Ken and Hilary Wise, with Sue very popular Newcomers’ Pairs, which is

the Vauxhall Recreation and give out the certificates to the win- Rankin – Brian Youd runners-up. The open to players with fewer than 300

Centre in Luton on June 27 with 105 ners. Best overall in the New Members Restricted Pairs (Regional Masters and Master Points, will be held at Ladock on

VPs; 36 teams competed in this event. category were Liz Wilsey – Christine above) was won by Howard Basden- November 21, and more experienced

At the Brighton Meeting, Alan Shillitoe Taulbut (in the photo below right) of Smith – Carl Harrison, with Martin players may like to play in the County

and partner were 11th out of 352 pairs Bradshaw BC with 64.96%, while the Rogers – Richard Christenson in second Knock-out, a green-pointed teams com-

competing for the first weekend Swiss Existing Members winners were, very place. The Lower Restricted (below Re- petition played in members’ homes

Pairs event with 184 VPs. Alan Shillitoe appropriately, two of our Tollemache gional Master) was won by Sue (entries to Pauline Deal by Oct 17.)

=4th (out of 182) in qualifying for the 75% at Amersham Community Centre. Sutton – Sue Le Sueur second. The will now be held on Sunday Jan 9, not

Four Star A Final. They then came 6th There were a number of good Jersey Individual resulted in: 1. Eric Saturday 8, as in the County booklet.

and 7th respectively in the Final itself. performances by BBCBA players at Todd, =2 John Honey and Neville Bush. Diary Dates: Oct 3, Cornwall Mixed