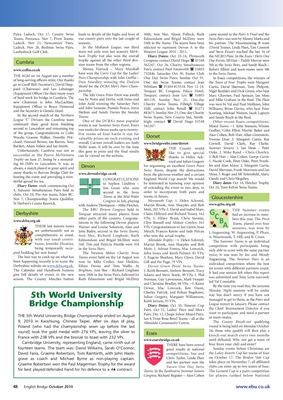 Pairs, Ladock. Oct 17, County Swiss leads to details of the highs and lows of 46th; Ann Slee, Alison Pollock, Ruth came second in the Pairs A Final and the

Teams, Penzance. Nov 7, Pivot Teams, our county pairs over the last couple of Edmondson and Brigid McElroy were Swiss Pairs was won by Manny Marks and

Ladock. Nov 21, Newcomers’ Pairs, seasons. 54th in the Teams. The teams have been his partner. The Mountnessing B team

ham Trophy but also won the overall Diary Dates: Oct 23-24, Plymouth the NICKO Plate. In the Essex / Herts One

Cumbria sion teams from the other regions. 562267. Oct 26, Charity Simultaneous 5th in the Swiss Pairs, and Sandy Riach –

THE AGM on 1st August saw a number Pairs Championship, with John Griffin – One Day Swiss Pairs; Sunday Oct 31, In Essex competitions, the winners of

of long-serving officers retire. Our thanks Don Smedley winning the Dodson One day Swiss Teams; contact Jean the Team of Four Trophy were Margaret

of hard work for bridge in Cumbria. The run by Notts and Derby, with Irene and 401119. Sunday Nov 21, One-day and Mike Graham in the final. The Plate

In the second match of the Northern Teams. Swiss Teams, New County Inn, Smith- and Sandy Riach in the final.

League ‘C’ Division the Cumbria team One of the DCBA’s most popular leigh; contact ( David Hugo 01548 Other recent Essex competitions:

second to Lancashire and remaining top two weeks for eleven weeks up to twenty- Godber, Colin Elliot, Martin Baker and

of the group. Congratulations to Colin five teams of four battle it out for Alan Cohen, Bob Hair, Allan Greenstein,

Bartlett, Adam Aitken and Ian Smith. Wells’ team. It will be over by the time Summer Seniors: 1. Ian Moss – Peter

Unfortunately, Cumbria was not as this goes to press and the final results Oake, 2. Mike Rand – Chris Chorley,

successful in the Pearse McNamara can be viewed on the website. 3. Bob Hair – Alan Cohen. George Curtis:

thanks to Helen Ack-

ing 84 IMPs to Lancashire. It was, as lin and Alan Mayo; 2. Margaret Curtis,

Swiss Teams, despite the distractions

many thanks to Barrow Bridge Club for www.devonbridge.co.uk Moss; 3. Roger and Jill Tattersfield, Alaric

from the glorious weather and a certain

hosting the event and providing a won- Cundy and Chris Megahey.

to Sephen Lindfors – be interested in knowing your opinion

Jim Grant who were

4, Autumn Simultaneous Pairs held in order to incorporate both pairs and

second in the Swiss

Teams at the Mid Wales Gloucestershire

Derbyshire Torquay attracted many players from Claire Hillyard and Richard Vessey, 162 had an increase in num-

other parts of the country. Congratu- VPs; 3. Hilary Brain, Chris Stevens, bers this year. The Pivot

THESE last minute notes Warner and Louise Solomon, Alan and VPs. Congratulations to Jan Green, Joan sessions, was won by

with our usual con tri - Edmondson and Brigid McElroy were Allendale Trophy: =1. Helen Ackroyd, The Summer Teams is an individual

being temporarily occu- in the Swiss Pairs. Mott; 2. Adrian Fontes, Mac Lowcock, only able to score with the same partner

The best way to catch up on what has Teams event held on the 1st August was 3. Eugene Sheehan, Mary Clews, David Angseesing. The Summer Pairs is an

been happening recently is to scour the won by Mike Crelley, Ann Hinkins, Gill and Pat Page, 79 VPs. individual competition where the best

It had one session left when this report

give full details of events in the new were 28th in the Swiss Pairs, followed by Adams and Steve Tearle, 99 VPs; 2. Phil

By the time you read this, the autumn

Charles Patrick, and Rohan Bagshawe, Monday Night sessions will be under

5th World University Julian Gregory, Margaret Williamson, way but don’t worry if you have not

managed to get to them, as the Pairs and

the Chief Tournament Director if you

Jan 9, Frost Rose Bowl Teams – all at the

round) took the gold medal with 276 VPs, leaving the silver to 26; those who qualify will then play a

www.essexbridge.co.uk until defeated. Why not get a team of

Cambridge University, representing England, came ninth out of four from your club and enter?

THERE have been several

and her partner won the takes place on November 7; all affiliated

Graeme Robertson won the Paul Magerman Trophy for the award

Sussex One Day Swiss clubs can enter up to two teams of four.

for best played/defended hand for his defence to a 4´ contract. Teams. In the Eastbourne Summer Seniors The Leonard Cup is a pairs competition