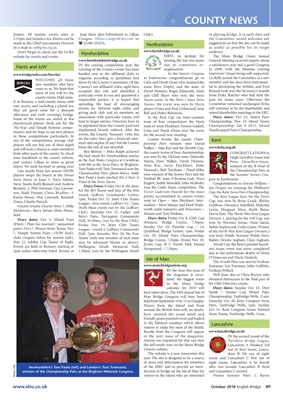 Master. All Sunday events start at least three days beforehand to Lillian Club). in playing bridge. It is early days and

2.15pm and include a tea. Entries can be Craigen, lillian.craigen@sky.com or the Committee would welcome any

made to the Chief tournament Director ( 02380 254276. Hertfordshire suggestions so that the site can be made

by e-mail to ctd@gcba.org.uk. as useful as possible for its target

Don’t forget to check out the GCBA www.hertsbridge.co.uk audience.

Herefordshire FIRST, an apology for The Manx Bridge Union Annual

IN the coming competition year, the due to committee re - a satisfactory year and a good Congress

Hants and IoW running of the County events has been organisation. in 2009, with the Monday evening

www.bridgewebs.com/hiwcba/ handed over to the affiliated clubs to In the Seniors Congress improvers’ classes being well supported.

organise according to guidelines laid at Eastbourne, congratulations go to Liz Kelly joined the Committee as a new

down by the County Committee. Of the Celia and Derek Oram who retained the member and has since been instrumen-

new members who have

County’s ten affiliated clubs, eight have main Pairs Trophy, and the team of tal in developing the website, and Fred

come to us. We hope that

some of you will try the

responsible person. It is hoped that Teams event. In the Herts / Essex Swiss post for many years. Otherwise the

ly in Romsey, a mid-county venue with

spreading the load of encouraging Teams, the event was won by Herts Committee remained unchanged. Erika

entries etc. between eight clubs, and players Fiona and Paul Littlewood, June will continue to be the shareholder and

they are good value for a pleasant

giving each club and its members an Ball and Helen Robinson. attend shareholder meetings at the EBU.

association with particular events, will In the Beck Cup (an inter-counties Diary dates: Oct 24, Island Pairs

Some of the events are aimed at less

experienced players (look out for the

be appointed from the County pool and team of Anne Flockhart, Vernon Gaskell, Championship. Jan 9 2011, Island

‘No Fear’ and ‘Simple Systems’ compe-

titions) and we hope to see new players

events, the County Treasurer (who has for the second year running.

in these competitions particularly. In

set the entry fees) gets a financial sum- County Events: the county Cham-

any of the competitions, average club

mary and surplus (if any) but the County

bears the risk of any shortfall. Walker – Alan Kay and the Humble Cup, www.kcba.org.uk

and will have a chance to meet members

from other parts of the county. So check

with 8th in the Swiss Pairs. At Brighton, Alan Kay, Anne Flockhart, Mike winners of the B Final of

below. We look forward to seeing you!

Championship Pairs (photo below), while were winners of the Seniors Pairs and the the Summer Seniors Con-

players swept the board at the Dorset

for the KO Teams and play of the first Victor Ludorum Awards for the most Cup, the Kent Swiss Pairs Championship.

round, Ledbury Community Centre, points accumulated in county events The Kent League East, for the Dover

County results: Charity Sims: 1. Mike (both these events run by the Ledbury

clubs (inquire below for nearest club). Teams (only one member of each team

Nov 21, Jubilee Cup Teams of Eight. may be Advanced Master or above),

2pm unless otherwise listed. Entries at 1.30pm (run by the Wellington Heath

due to the unfortunate deaths of Denis

Isle of Man The Arnold Plate was won by Graham

BY the time this issue of Graham Pollack .

the magazine is circu- Well done also to Chris Burton who

lated, the biggest event obtained distinction in the final part of

in the Manx bridge his Club Directors course.

Man Bridge Congress will have been Championship, Tunbridge Wells, 11am.

Players from the Island and from Pairs, Tunbridge Wells, 1pm. Sunday

around the British Isles will, no doubt, Oct 31, Kent Congress Green Pointed

have enjoyed the usual small and Swiss Teams, Tunbridge Wells, 11am.

in the habitual sunshine which allows Lancashire

visitors to make the most of the Island.

Results from the Congress will appear www.lancsbridge.co.uk

in the next issue of the magazine. IN the second round of the

Anyone too impatient for that can view Northern Bridge League,

year. The site is designed to be a source teams and Lancashire C first out of

of news and information for members eight teams. Lancashire A lie fourth

Herefordshire’s Tom Paske (left) and London’s Tom Townsend, of the MBU and to provide an intro- after two rounds, Lancashire B third

winners of the Championship Pairs at the Brighton Midweek Congress duction to bridge on the Isle of Man for and Lancashire C second.

visitors to the Island who are interested Preston Summer Pairs: 1. Barrie