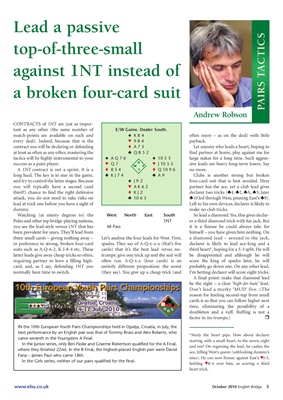 against 1NT instead of

CONTRACTS of 1NT are just as impor-

tant as any other (the same number of E/W Game. Dealer South.

contract you will be declaring or defending t A73 Let anyone who leads a heart, hoping to

at least as often as any other, mastering the ® Q852 find partner at home, play against me for

tactics will be highly instrumental to your ´ AQ76 ´ 10 5 3 large stakes for a long time. Such aggres-

long haul. The key is to stay in the game, ® KJ74 ® A9 Clubs is another strong but broken

and try to control the latter stages. Because ´ J92 four-card suit that is best avoided. Here

you will typically have a second (and ™ AK62 partner has the ace, yet a club lead gives

lead at trick one before you have a sight of Left to his own devices, declarer is likely to

Watching (at ninety degrees to) the West North East South So lead a diamond. Yes, this gives declar-

Poles and other top bridge-playing nations, 1NT er a third diamond trick with his jack. But

been prevalent for years. They’ll lead from himself – you have given him nothing. On

three small cards – giving nothing away – Let’s analyse the four leads for West. First, a diamond lead – around to the jack,

in preference to strong, broken four-card spades. They say of A-Q-x-x-x (that’s five declarer is likely to lead ace-king and a

latter leads give away cheap tricks so often, trumps: give one trick up and the suit will be disappointed and although he will

requiring partner to have a filling high- often run. A-Q-x-x (four cards) is an score the king of spades later, he will

card, and, as I say, defending 1NT you entirely different proposition: the worst probably go down one. On any other lead,

normally have time to switch. (they say). You give up a cheap trick (and I’m betting declarer will score eight tricks.

be the eight – a clear ‘high-for-hate’ lead.

reason for leading second-top from small

cards is so that you can follow higher next

time, eliminating the possibility of a

doubleton and a ruff. Ruffing is not a

IN the 10th European Youth Pairs Championships held in Opatja, Croatia, in July, the

best performance by an English pair was that of Tommy Brass and Alex Roberts, who

*Study the heart pips. How about declarer

came seventh in the Youngsters A Final.

starting with a small heart, to the seven, eight

In the Junior series, only Ben Paske and Graeme Robertson qualified for the A Final,

and ten? On regaining the lead, he cashes the

where they finished 22nd. In the B Final, the highest-placed English pair were David

In the Girls series, neither of our pairs qualified for the final.

holding ™K-6 over him, so scoring a third