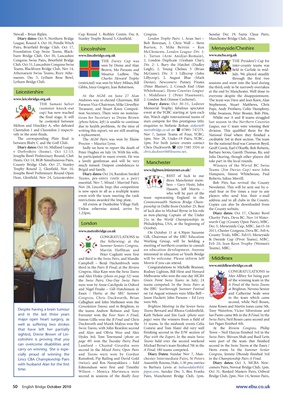 Leicestershire Whitehouse). Home Counties League: at the end by Manchester. Well done to

At the AGM on June 27 Alan 1. Middlesex 2 (Peter Hasenson), everyone despite the disappointment.

cup) has now reached tion Secretary. There were no nomina- event at the YCBC starting at 1pm each Mike Swanson, Peter Broster, Bob Pitts.

the final stage. It will tions for Secretary as Drene Brown day. Watch eight international teams of Whilst our A and B teams struggled

be contested between (photo below, left) is unable to continue stars compete for this prestigious title; last season in the Northern Counties

Melton and Hinckley A, who defeated due to health problems. At the time of enquiries to Stefanie Rohan stefanie@ League, our C team were winning their

Clarendon 1 and Clarendon 2 respecti- writing this report, we are still awaiting metrobridge.co.uk or ( 07891 747273. division. This qualified them for the

vely in the semi-finals. a replacement. Nov 7, Junior Teams of Four, YCBC, National Final where they finished a

The corresponding Plate final is The AGM Pairs was won by Elaine 1pm. Nov 28, Under-19 Pairs, YCBC, creditable 3rd in their section. The team

between Blaby C and the Golf Club. Proctor – Maurice Lynn. 1pm. For both junior events contact for the national final was Cameron Boyd,

Josephs Bowl Preliminary Round, Club he participated in many events. He was Julia Dearing, though other players did

Heats. Oct 14, BGB Simultaneous Pairs, a lovely gentleman and will be very take part in the local rounds.

much missed. Deepest condolences to Winners of the Wirral BC Swiss

Heat, Glenfield. Nov 24, Leicestershire BEST of luck to our

Teams, pre-entry (only as a pair) Roberts, Julian Merrill.

Nov 28, Lincoln Imp; this competition Newsletter. This will be sent out by e-

who will be part of the

team representing England in the

restrictions awarded the Imp plate. address and to all clubs in the County.

All events at Dunholme Village Hall. Copies can also be downloaded from

pionship in Delhi from October 23. Best

of luck also to Michael Byrne in his role

as non-playing Captain of the Under

21s in the World Championships in Charity Pairs, Deva BC. Nov 14 Water-

London Philadelphia, USA, at the beginning of

the following: at the

on education development. Anyone Teams), MBC.

Peter Cogliatti were first interested in education or Youth Bridge

and third in the Swiss Pairs, and Mandie will be welcome. Please inform Jeff Middlesex

Campbell – Benji Hackenbroch were Morris if you can attend.

third in the Pairs B Final; at the Riviera

the Swiss Pairs; One-Day Swiss Pairs Green Point Swiss Teams in July; 24 of the winning team in the

were won by Anne Catchpole in Oxford teams competed. In the Swiss Pairs at A Final of the Swiss Teams

Essex / Herts; at the SBU Summer on 1st August winners were Mike Bell – and Catherine Seale were

Callaghan and John Matheson won the were 9th. second, while Neil Rosen,

Consolation Teams; and in Brighton, in Brighton Meeting: in the Senior Swiss Anne Rosen and Martin Jones came 5th.

Despite having a brain tumour the teams Andrew Robson and Tony Teams Bernard and Rhona Goldenfield, Tony Waterlow, Victor Silverstone and

and in the last three years Forrester won the Four Stars A Final, Kath Nelson and Jim Luck (photo next Ian Panto came 8th in the B Final. In the

major open heart surgery, as Simon Gillis won the B Final and Chris page) were the winners from a field of Swiss Pairs, Neil Rosen came second and

that have left her partially Swiss Teams, with John Reardon second Comrie and Tom Slater did very well At the Riviera Congress, Philip

colnshire is proving that you page 49) won the Tuesday Pairs; Paul Teams held over the second weekend were part of the team that finished

carry on winning. She is espe- second in the Mixed Pairs; Open Pairs A Final; 180 teams competed. Herts event. In the Summer Senior