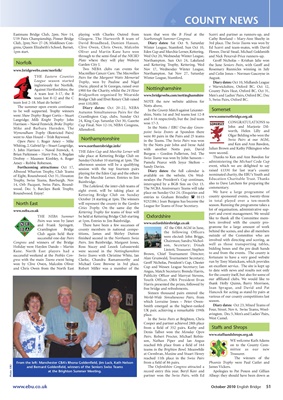 Eastmans Bridge Club, 2pm. Nov 14, playing with Charles Outred from team that won the B Final at the Scerri and partner as runners-up, and

through to the semi-final of the NICKO Wed Oct 20, Wednesday Winter League, and Nick Perceval-Price runners-up.

Against Hertfordshire, the £900 for the Charity, whilst the 24 Hour Nottinghamshire County Pairs Heat, Oxford BC. Oct 31,

A team lost 3-17, the B Bridgeathon organised by Wearside www.bridgewebs.com/nottinghamshire Men’s and Ladies’ Pairs, Oxford BC. Dec

team lost 2-18. Must do better! NOTE the new website address for

to be well supported. Trophy winners Autumn Simultaneous Pairs for the

In the County Match against Leicester- Somerset

Mike and Barbara Harnden. The In the Notts / EBU One-day Green-

Allensford. worth, Helen Lilly and

went to Alan Hourd – Trish Raywood. were 80 pairs in the Pairs and 25 teams Olgar Belding who won the

THE Eden Cup and Murchie Lerner will were second.

afternoon session will be a qualifying event, which we are delighted to say

playing for the Eden Cup and the others nominated charity, the EBU’s Youth and

of Eight, Roundwood. Oct 31, Houston available on the website. On Wed-

for the Murchie Lerner. Entries to Jim Education Charitable Trust. Thanks

Bainbridge. also to Dave Latchem for preparing the

The Lakeland, the inter-club teams of commentary.

eight event, will be taking place at We have a large programme of

October 24 starting at 1pm. The winners in total played over a ten-month

North East will represent the county in the Garden

League for Teams of Four Secretary. season. Running the programme takes a

Cities Trophy. On the same day the lot of organisation, administrative sup-

www.neba.co.uk Kettering Trophy for teams of four will port and event management. We would

Pairs was won by Janet at 1pm. Entries to Jim Bainbridge. bers involved with the county pro-

and Frank Springett. There have been a few successes of gramme for a large amount of work

Cramlington Bridge county members in national compe- AT the OBA AGM in June,

the following Officers behind the scenes, and also all members

Club again held their titions, James and Shirley Dutton outside of the Committee who are

Chairman; Sandra Nichol- involved with directing and scoring, as

Congress and winners of the Bridge Pairs. Jim Bainbridge, Margaret Jones, well as those transporting tables,

Kane. North East players had a were second in the Nottinghamshire to and from the events. The county is

gress with the main Teams event being Clarke, Chandra Ramamoorthy and run by Tony Manickam, which provides

Cup and Wessex League Secretary; Ian an excellent service. The site is kept up

Angus, Match Secretary; Brenda Harris, to date with news and results not only

Publicity Officer and Marryat Stevens, for the county itself, but also for some of

Youth Officer. OBA President Evan our affiliated clubs. We would like to

free bridge and refreshments. Joan Sprague, and David and Pat

World-Wide Simultaneous Pairs, from various of our county competitions last

In the Swiss Pairs at Brighton, Chris West Camel.

from a field of 352 pairs. Kathy and Staffs and Shrops

teams in the Brighton Bowl. Meanwhile mittee as our new

reached 11th place in the Swiss Pairs The winners of the

From the left: Manchester CBA’s Rhona Goldenfield, Jim Luck, Kath Nelson from a field of 86 pairs. Phoenix Trophy were Paul Cutler and

and Bernard Goldenfield, winners of the Seniors Swiss Teams The Oxfordshire Congress attracted a James Vickers.

at the Brighton Summer Meeting. record entry this year. Beryl Kerr and Apologies to Pat Poxon and Gillian

partner won the Swiss Pairs, with Ed Allsop: they should have been down as