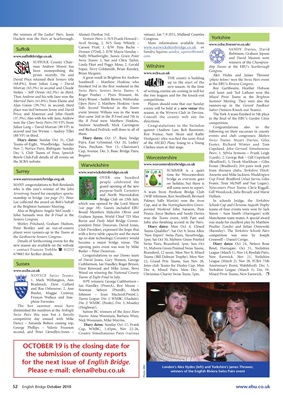 and David Musson were

winners of the Champion-

been monopolising the Congress.

(68.8%), from Julian Lang – David Southwell – Matthew Hoskins who up to the start of the at the EBU’s Riviera Congress.

Morran (63.3%) in second and Claude finished 3rd in the first weekend in the new season. At the time Roy Garthwaite, Heather Hobson

Stokes – Jeff Orton (62.3%) in third. Swiss Pairs. Seniors Swiss Teams: 4. of writing, entries are coming in well for and Janet and Ted Latham won the

Then Andrew and his wife Jane won the Roger Poulter – Pyers Pennant, 46. the two leagues and for the knock-out Mixed Pivot Teams at the Brighton

place was tied between Jenny and David Toft. Second Weekend: in the Teams events will be held at a new venue this Salver (Seniors Knock-out Teams).

Price, and Maureen and John Heath event Jeremy Willans was in the team season, at the Wyvern Club in Devizes. The York A team finished in 5th place

(57.3%). Also with his wife Jane, Andrew that came 2nd in the B Final and 7th in Consult the county web site for in the final of the EBU’s Garden Cities

won the Clare Swiss Pairs (93 VP), from the B Final were Matthew Hoskins, directions. competition.

second and Jan Wynne – Audrey Tillet and Richard Fedrick; well done to all of quintet (Andrew Law, Bob Bannister, following on their successes in county

Bowls Club.Full details of all events on Bognor.

Surrey SUMMER is a quiet from thirteen clubs. Yorkshire Flitch:

people celebrated the on holiday, but there is Foster, Tony McNiff and Sue Logan).

MANY congratulations to Bob Rowlands grand opening of the new

who is this year’s winner of the John still some news to report. Newcomers Pivot Teams: Chris Riggall,

at the Brighton Summer Meeting. Cup, and at the Nottinghamshire Green- Schools Cup and Christine Asquith Trophy

Also at Brighton Angela McCready – Board Members Malcolm Oliver and

John Samuels won the B Final at the Pearce, Joyce Skelton and Sandy Davies Simm – Sam Smith (Harrogate) with

Shirley Pritchard, Graham Hudson, John also finishing second in the Pairs. was made for excellent play by Matthew

Peter Bentley and an out-of-county Club President, expressed the hope that

with a forty-table capacity and the most ‘Non Expert’ Swiss Pairs, Stourbridge, competition was won by Joseph

The hot summer must have (Heighway).

OCTOBER 19 is the closing date for

the submission of county reports

for the next issue of English Bridge.