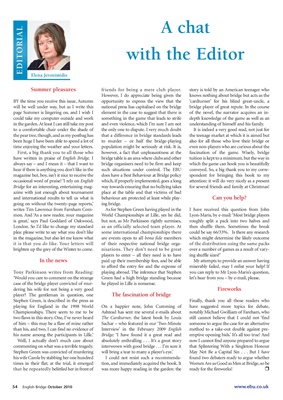 Summer pleasures friends for being a mere club player. story is told by an American teenager who

However, I do appreciate being given the knows nothing about bridge but acts as the

BY the time you receive this issue, Autumn opportunity to express the view that the ‘cardturner’ for his blind great-uncle, a

will be well under way, but as I write this national press has capitalised on the bridge bridge player of great repute. In the course

page Summer is lingering on, and I wish I element in the case to suggest that there is of the novel, the narrator acquires an in-

in the garden. At least I can still take my post and even violence, which I’m sure I am not understanding of himself and his family.

to a comfortable chair under the shade of the only one to dispute. I very much doubt It is indeed a very good read, not just for

the pear tree, though, and as my postbag has that a difference in bridge standards leads the teenage market at which it is aimed but

time enjoying the weather and your letters. population might be seriously at risk. It is, even non-players who are curious about the

First, a big thank you to all those who however, a fact that unpleasantness at the fascination of the game. Wisely, bridge

have written in praise of English Bridge. I bridge table is an area where clubs and other tuition is kept to a minimum, but the way in

hear if there is anything you don’t like in the such situations under control. The EBU conveyed. So, a big thank you to my corre-

magazine but, boy, isn’t it nice to receive the does have a Best Behaviour at Bridge policy spondent for bringing this book to my

occasional word of praise! ‘I rely on English which, if properly implemented, goes a long attention: it will do very nicely as a present

Bridge for an interesting, entertaining mag- way towards ensuring that no bullying takes for several friends and family at Christmas!

and international results to tell us what is behaviour are protected at least while play- Can you help?

going on without the twenty-page reports,’ ing bridge.

mon. And ‘As a new reader, your magazine World Championships at Lille, yes he did, Lyon-Maris, by e-mail: ‘Most bridge players

is great,’ says Paul Goddard of Oakwood, but not, as Mr Parkinson rightly surmises, roughly split a pack into two halves and

London. So I’d like to change my standard as an officially selected team player. At then shuffle them. Sometimes the break

plea: please write to say what you don’t like some international championships there could be say 66/33%. Is there any research

in the magazine, but also let me know what are events open to all bona fide members which might determine the likely outcome

it is that you do like. Your letters will of their respective national bridge orga- of the distribution using the same packs

brighten up the grey of the Winter to come. nisations. They don’t need to be great over a number of games as a result of vary-

players to enter – all they need is to have ing shuffle sizes?’

In the news paid up their membership fees, and be able My attempts to provide an answer having

to afford the entry fee and the expense of miserably failed, may I enlist your help? If

Tony Parkinson writes from Reading: playing abroad. The inference that Stephen you can reply to Mr Lyon-Maris’s question,

‘Would you care to comment on the strange Green had a high bridge standing because let’s hear from you – by e-mail, please.

case of the bridge player convicted of mur- he played in Lille is nonsense.

dering his wife for not being a very good Fireworks

player? The gentleman in question, one The fascination of bridge

Stephen Green, is described in the press as Finally, thank you all those readers who

Championships. There seem to me to be Ashtead has sent me several e-mails about notably Michael Gwilliam of Fareham, who

two flaws in this story. One, I’ve never heard The Cardturner, the latest book by Louis still cannot believe that I could not ‘find

than his, and two, I can find no evidence of Interview’ in the February 2009 English method to a take-out double against pre-

his name among the participants in Lille.’ Bridge: ‘I have found it a great read and emptive opening bids.’ It’s all too true! And

Well, I actually don’t much care about absolutely enthralling . . . It’s a great story now I cannot find anyone prepared to argue

commenting on what was a terrible tragedy. interwoven with good bridge . . . I’m sure it that Splintering With a Singleton Honour

Stephen Green was convicted of murdering will bring a tear to many a player’s eye.’ May Not Be a Capital Sin . . . But I have

times in their flat; at the trial, it emerged tion, and immediately acquired the book. It Women Are as Good as Men at Bridge, so be

that he repeatedly belittled her in front of was more happy reading in the garden: the ready for the fireworks! r