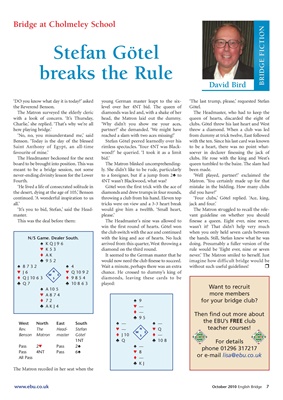 ‘DO you know what day it is today?’ asked young German master leapt to the six- ‘The last trump, please,’ requested Stefan

the Reverend Benson. level over her 4NT bid. The queen of Götel.

The Matron surveyed the elderly cleric diamonds was led and, with a shake of her The Headmaster, who had to keep the

with a look of concern. ‘It’s Thursday, head, the Matron laid out the dummy. queen of hearts, discarded the eight of

Charlie,’ she replied. ‘That’s why we’re all ‘Why didn’t you show me your aces, clubs. Götel threw his last heart and West

here playing bridge.’ partner?’ she demanded. ‘We might have threw a diamond. When a club was led

‘No, no, you misunderstand me,’ said reached a slam with two aces missing!’ from dummy at trick twelve, East followed

Benson. ‘Today is the day of the blessed Stefan Götel peered learnedly over his with the ten. Since his last card was known

Saint Anthony of Egypt, an all-time rimless spectacles. ‘Your 4NT was Black- to be a heart, there was no point what-

favourite of mine.’ wood?’ he queried. ‘I took it as a limit soever in declarer finessing the jack of

The Headmaster beckoned for the next bid.’ clubs. He rose with the king and West’s

board to be brought into position. This was The Matron blinked uncomprehending- queen tumbled to the baize. The slam had

meant to be a bridge session, not some ly. She didn’t like to be rude, particularly been made.

never-ending divinity lesson for the Lower to a foreigner, but if a jump from 2´ to ‘Well played, partner!’ exclaimed the

Fourth. 4NT wasn’t Blackwood, what was? Matron. ‘You certainly made up for that

‘He lived a life of consecrated solitude in Götel won the first trick with the ace of mistake in the bidding. How many clubs

the desert, dying at the age of 105,’ Benson diamonds and drew trumps in four rounds, did you have?’

continued. ‘A wonderful inspiration to us throwing a club from his hand. Eleven top ‘Four clubs,’ Götel replied. ‘Ace, king,

‘It’s you to bid, Stefan,’ said the Head- would give him a twelfth. ‘Small heart, The Matron struggled to recall the rele-

master. please.’ vant guideline on whether you should

This was the deal before them: The Headmaster’s nine was allowed to finesse a queen. Eight ever, nine never,

win the first round of hearts. Götel won wasn’t it? That didn’t help very much

N/S Game. Dealer South. with the king and ace of hearts. No luck the hands. Still, Stefan knew what he was

´ KQJ96 arrived from this quarter, West throwing a doing. Presumably a fuller version of the

™ K53 diamond on the third round. rule would be ‘Eight ever, nine or seven

t AK It seemed to the German master that he never.’ The Matron smiled to herself. Just

® 952 would now need the club finesse to succeed. imagine how difficult bridge would be

´ 8732 ´ 4 Wait a minute, perhaps there was an extra without such useful guidelines! r

Then find out more about

All Pass t — or e-mail lisa@ebu.co.uk

The Matron recoiled in her seat when the