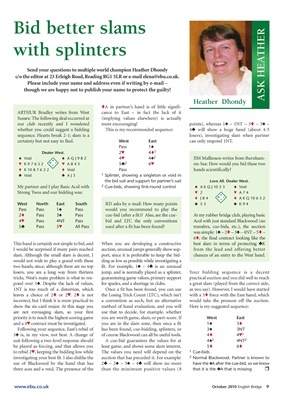 tA in partner’s hand is of little signifi-

whether you could suggest a bidding This is my recommended sequence: 4® will show a huge hand (about 4-5

certainty but not easy to find. West East can only respond 1NT.

® Void ® AJ3 1 Splinter, showing a singleton or void in

the bid suit and support for partner’s suit Love All. Dealer West.

Strong Twos and our bidding was: ™ 2 N

Pass Pass 1´ Pass would you recommend to play the

2t Pass 3´ Pass cue-bid (after a fit)? Also, are the cue- At my rubber bridge club, playing basic

5® Pass 5™ All Pass used after a fit has been found? transfers, cue-bids, etc.), the auction

This hand is certainly not simple to bid, and When you are developing a constructive best slam in terms of protecting ®K

I would be surprised if many pairs reached auction, unusual jumps generally show sup- from the lead and offer ing better

slam. Although the small slam is decent, I port, since it is preferable to keep the bid- chances of an entry to the West hand.

losers, you are a long way from thirteen jump, and is normally played as a splinter, Your bidding sequence is a decent

tricks. West’s main problem is what to res- guaranteeing game values, primary support practical auction and you did well to reach

pond over 1´. Despite the lack of values, for spades, and a shortage in clubs. a great slam (played from the correct side,

1NT is too much of a distortion, which Once a fit has been found, you can use as you say). However, I would have started

leaves a choice of 2t or 2™. 2t is not the Losing Trick Count (LTC), which isn’t with a 3t force with the East hand, which

incorrect, but I think it is more practical to a convention as such, but an alternative would take the pressure off the auction.

show the six-card major. At this stage you method of hand evaluation, and you will Here is my suggested sequence:

are not envisaging slam, so your first use that to decide, for example, whether

priority is to reach the highest scoring game you are worth game, slam, or part-score. If West East

and a 4™ contract must be investigated. you are in the slam zone, then once a fit 1´ 3t

Following your sequence, East’s rebid of has been found, cue-bidding, splinters, or 3´ 3NT

be played as forcing, and that allows you least game, and shows some slam interest. 5t 6t

to rebid 2™, keeping the bidding low while The values you need will depend on the 1 Cue-bids

investigating your best fit. I also dislike the auction that has preceded it. For example: 2 Normal Blackwood. Partner is known to

three aces and a void. The presence of the than the minimum positive values (8 that it is the ®A that is missing r