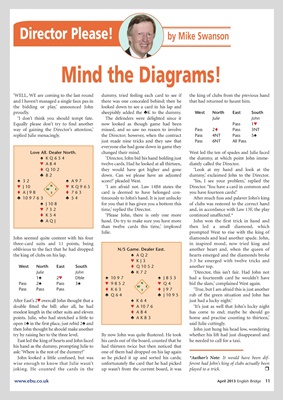 ‘WELL, WE are coming to the last round dummy, tried feeling each card to see if the king of clubs from the previous hand

and I haven’t managed a single faux pas in there was one concealed behind; then he that had returned to haunt him.

the bidding or play,’ announced John looked down to see a card in his lap and

‘I don’t think you should tempt fate. The defenders were delighted since it Julie John

way of gaining the Director’s attention,’ missed, and so saw no reason to involve Pass 2t Pass 3NT

replied Julie menacingly. the Director; however, when the contract Pass 4NT Pass 5´

everyone else had gone down in game they

Love All. Dealer North. changed their mind. West led the ten of spades and Julie faced

™ A84 twelve cards. Had he looked at all thirteen, diately called the Director.

® 82 down. Can we please have an adjusted dummy,’ exclaimed John to the Director.

t AJ98 S t 763 card is deemed to have belonged con- you have fourteen cards!’

t K54 ‘Please John, there is only one more continued unaffected.*

® AQJ hand. Do try to make sure you have more John won the first trick in hand and

than twelve cards this time,’ implored then led a small diamond, which

Julie. prompted West to rise with the king of

John seemed quite content with his four diamonds and lead another spade. John,

three-card suits and 11 points, being in inspired mood, now tried king and

oblivious to the fact that he had dropped N/S Game. Dealer East. another heart and, when the queen of

the king of clubs on his lap. ´ AQ2 hearts emerged and the diamonds broke

Julie John ® K72 ‘Director, this isn’t fair. Had John not

After East’s 2™ overcall John thought that a ´ K64 just had a lucky night.’

modest length in the other suits and eleven t A84 has come to end; maybe he should go

points. Julie, who had stretched a little to ® AK83 home and practise counting to thirteen,’

then John thought he should make another John just hung his head low, wondering

try by raising her to the three level. By now John was quite flustered. He took whether his lift had just disappeared and

East led the king of hearts and John faced his cards out of the board, counted that he he needed to call for a taxi.

his hand as the dummy, prompting Julie to had thirteen twice but then noticed that

ask: ‘Where is the rest of the dummy?’ one of them had dropped on his lap again

John looked a little confused, but was so he picked it up and sorted his cards; *Author’s Note: It would have been dif-

joking. He counted the cards in the up wasn’t from the current board, it was played to a trick. r