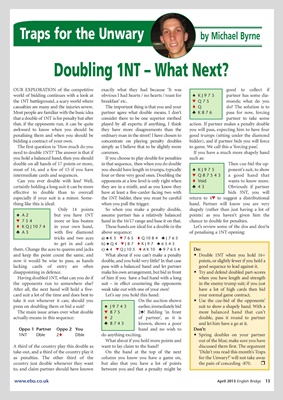 Doubling 1NT – What Next?

the 1NT battleground, a scary world where breakfast’ etc. ™ Q75 monds; what do you

casualties are many and the injuries severe. The important thing is that you and your t Q do? The solution is to

Most people are familiar with the basic idea partner agree what double means. I don’t ® K876 pass for now, forcing

that, if the opponents run, it can be quite played by all experts; if anything, I think action. If partner makes a penalty double

awkward to know when you should be they have more disagreements than the you will pass, expecting him to have four

penalising them and when you should be ordinary man in the street! I have chosen to good trumps (sitting under the diamond

bidding a contract of your own. concentrate on playing penalty doubles bidder), and if partner bids you will force

The first question is: ‘How much do you simply as I believe that to be slightly more to game. We call this a ‘forcing pass’.

need to double 1NT?’ The answer is that if common. If you have a much more shapely hand

you hold a balanced hand, then you should If you choose to play double for penalties such as:

double on all hands of 17 points or more, in that sequence, then when you do double Then cue-bid the op-

intermediate cards and sequences. four or three very good ones. Doubling the ™ Q87543 a good hand that

Can you ever double with less? Well, opponents at a low level is only right when t Void wants to know more.

certainly holding a long suit it can be more they are in a misfit, and as you know they ® 43 Obviously if partner

effective to double than to overcall have at least a five-carder facing two with bids 3NT, you will

especially if your suit is a minor. Some- the 1NT bidder, then you must be careful return to 4™ to suggest a distributional

thing like this is ideal: when you pull the trigger. hand. Partner will know you are very

Only 14 points So when you make a penalty double, shapely (rather than just having a lot of

t K Q J 10 7 4 in your own hand, These hands are ideal for a double in the Let’s review some of the dos and don’ts

® A3 with five diamond above sequence: of penalising a 1NT opening:

and keep the point count the same, and What about if you can’t make a penalty • Double 1NT when you hold 16+

now it would be wise to pass, as hands double, and you hold very little? In that case points, or slightly fewer if you hold a

lacking cards of entry are often pass with a balanced hand and let partner good sequence to lead against it.

disappointing in defence. make his own arrangement, but bid in front • Try and defend doubled part-scores

Having doubled 1NT, what can you do if of him if you have a bad hand with a long when you have length and strength

the opponents run to somewhere else? suit – in effect countering the opponents in the enemy trump suit; if you just

After all, the next hand will hold a five- weak take out with one of your own! have a lot of high cards then bid

card suit a lot of the time and does best to Let’s say you hold this hand: your normal game contract.

take it out whenever it can; should you On the auction shown • Use the cue-bid of the opponents’

press on doubling them or bid a suit? ´ J9743 earlier, immediately bid suit to show a shapely hand. With a

The main issue arises over what double ™ 875 2´! Bidding ‘in front more balanced hand that can’t

actually means in this sequence: t 2 of partner’, as it is double, pass it round to partner

Oppo 1 Partner Oppo 2 You hand and no wish to Don’t:

1NT Dble 2t Dble do anything exciting. • Spring doubles on your partner

What about if you hold more points and out of the blue; make sure you have

A third of the country play this double as want to lay claim to the hand? discussed them first. The argument

take-out, and a third of the country play it On the hand at the top of the next ‘Didn’t you read this month’s Traps

as penalties. The other third of the column you know you have a game on, for the Unwary?’ will not take away

country just double whenever they want but also that you have a lot of points the pain of conceding -870. r

to, and claim partner should have known between you and that a penalty might be