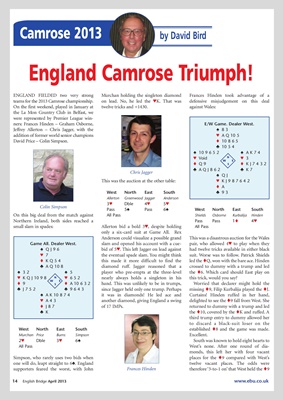 teams for the 2013 Camrose championship. on lead. No, he led the ™K. That was defensive misjudgement on this deal

On the first weekend, played in January at twelve tricks and +1430. against Wales:

the La Mon Country Club in Belfast, we

were represented by Premier League win-

Jeffrey Allerton – Chris Jagger, with the ´ 83

small slam in spades: Allerton bid a bold 3™, despite holding All Pass

only a six-card suit at Game All. Rex

Game All. Dealer West. slam and opened his account with a cue- pair, who allowed 4™ to play when they

´ QJ96 bid of 5™. This left Jagger on lead against had twelve tricks available in either black

t KQ54 this made it more difficult to find the led the tQ, won with the bare ace. Hinden

® A Q 10 8 diamond ruff. Jagger reasoned that a crossed to dummy with a trump and led

´ 32 ´ 5 player who pre-empts at the three-level the t6. Which card should East play on

™ A43 another diamond, giving England a swing delighted to see the t9 fall from West. She

to discard a black-suit loser on the

West North East South established t8 and the game was made.

All Pass West’s none. After one round of dia-

monds, this left her with four vacant

Simpson, who rarely uses two bids when places for the t9 compared with West’s

one will do, leapt straight to 6´. England twelve vacant places. The odds were

supporters feared the worst, with John Frances Hinden therefore ‘3-to-1 on’ that West held the t9