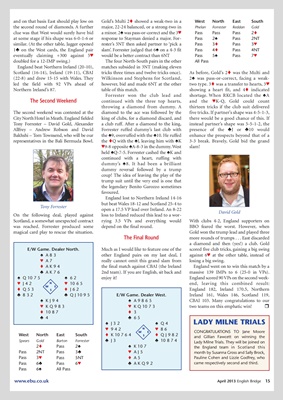 the second round of diamonds. A further major, 22-24 balanced, or a strong-two in Phelan Forrester Reddan Gold

clue was that West would surely have bid a minor. 2´ was pass-or-correct and the 3™ Pass Pass Pass 2t

similar. (At the other table, Jagger opened rester’s 5NT then asked partner to ‘pick a Pass 3t Pass 3™

doubled for a 12-IMP swing.) The four North-South pairs in the other All Pass

led the field with 92 VPs ahead of however, bid and made 6NT at the other two type. 3t was a transfer to hearts, 3™

Northern Ireland’s 87. table of this match. showing a heart fit, and 4t indicated

Forrester won the club lead and shortage. When RKCB located the ´A

The Second Weekend continued with the three top hearts, and the ™K-Q, Gold could count

throwing a diamond from dummy. A thirteen tricks if the club suit delivered

The second weekend was contested at the diamond to the ace was followed by the five tricks. If partner’s shape was 4-5-1-3,

City North Hotel in Meath. England fielded king of clubs, for a diamond discard, and there would be a good chance of this. If

Tony Forrester – David Gold, Alexander a club ruff. After a diamond to the king, instead partner’s shape was 5-5-1-2, the

Bakhshi – Tom Townsend, who will be our the ´9, overruffed with the ´10. He ruffed enhance the prospects beyond that of a

representatives in the Bali Bermuda Bowl. the tQ with the ´J, leaving him with ´K 3-3 break. Bravely, Gold bid the grand

continued with a heart, ruffing with

dummy’s ´8. It had been a brilliant

dummy reversal followed by a trump

coup! The idea of leaving the play of the

trump suit until the very end is one that

On the following deal, played against loss to Ireland reduced this lead to a wor-

Scotland, a somewhat unexpected contract rying 3.5 VPs and everything would With clubs 4-2, England supporters on

was reached. Forrester produced some depend on the final round. BBO feared the worst. However, when

The Final Round more rounds of trumps . . . East discarded

a diamond and then (yes!) a club. Gold

E/W Game. Dealer North. Much as I would like to feature one of the scored five club tricks, gaining a big swing

´ A83 other England pairs on my last deal, I against 6™ at the other table, instead of

™ A7 really cannot omit this grand slam from losing a big swing.