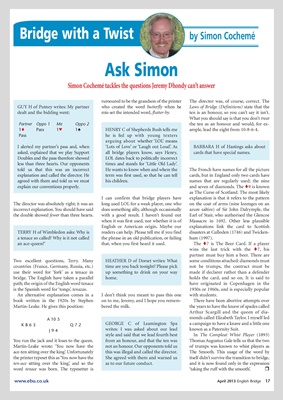 rumoured to be the grandson of the printer The director was, of course, correct. The

GUY H of Putney writes: My partner who created the word butterfly when he Laws of Bridge (Definitions) state that the

dealt and the bidding went: mis-set the intended word, flutter-by. ten is an honour, so you can’t say it isn’t.

What you should say is that you don’t treat

Partner Oppo 1 Me Oppo 2 the ten as an honour and would, for ex-

Pass he is fed up with young texters

arguing about whether ‘LOL’ means

I alerted my partner’s pass and, when ‘Lots of Love’ or ‘Laugh out Loud’. As BARBARA H of Hastings asks about

less than three hearts. Our opponents times and stands for ‘Little Old Lady’.

explanation and called the director. He term was first used, so that he can tell cards, but in England only two cards have

agreed with them and told us we must his children. names that are regularly used; the nine

explain our conventions properly. and seven of diamonds. The t9 is known

as The Curse of Scotland. The most likely

The director was absolutely right; it was an long used LOL for a weak player, one who on the coat of arms (nine lozenges on an

incorrect explanation. You should have said does something silly, although occasionally azure saltire) of Sir John Dalrymple, the

the double showed fewer than three hearts. with a good result. I haven’t found out Earl of Stair, who authorised the Glencoe

when it was first used, nor whether it is of Massacre in 1692. Other less plausible

English or American origin. Maybe our explanations link the card to Scottish

TERRY H of Wimbledon asks: Why is readers can help. Please tell me if you find disasters at Culloden (1746) and Twicken-

a tenace so called? Why is it not called the phrase in an old publication, or failing ham (1997).

an ace-queen?’ that, when you first heard it used. The t7 is The Beer Card. If a player

wins the last trick with the t7, his

partner must buy him a beer. There are

Two excellent questions, Terry. Many HEATHER D of Dorset writes: What some conditions attached: diamonds must

countries (France, Germany, Russia, etc.) time are you back tonight? Please pick not be trumps, the contract must be

bridge. The English have taken a parallel home. holds the card, and so on. It is said to

path; the origin of the English word tenace have originated in Copenhagen in the

An alternative explanation comes in a I don’t think you meant to pass this one with students.

book written in the 1920s by Stephen on to me, Jeremy, and I hope you remem- There have been abortive attempts over

Martin-Leake. He gives this position: bered the milk. the years to have the knave of spades called

Arthur Scargill and the queen of dia -

A 10 5 monds called Elizabeth Taylor. I myself led

J94 writes: I was asked about our lead known as a Paternity Suit.

You run the jack and it loses to the queen. from an honour, and that the ten was Thomas Augustus Gale tells us that the two

Martin-Leake wrote: ‘You now have the not an honour. Our opponents told us of trumps was known to whist players as

ace-ten sitting over the king’. Unfortunately this was illegal and called the director. The Smooth. This usage of the word by

the printer typeset this as ‘You now have the She agreed with them and warned us itself didn’t survive the transition to bridge,

ten-ace sitting over the king’, and so the as to our future conduct. and it is now found only in the expression

word tenace was born. The typesetter is ‘taking the ruff with the smooth’. r