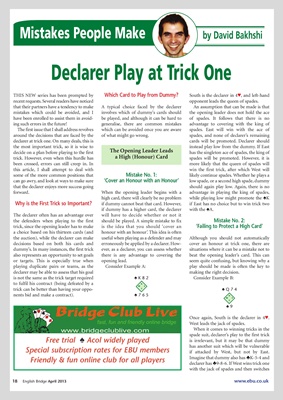 Declarer Play at Trick One

THIS NEW series has been prompted by Which Card to Play from Dummy? South is the declarer in 4™, and left-hand

mistakes which could be avoided, and I involves which of dummy’s cards should the opening leader does not hold the ace

have been enrolled to assist them in avoid- be played, and although it can be hard to of spades. It follows that there is no

ing such errors in the future! generalise, there are common mistakes advantage to covering with the king of

The first issue that I shall address revolves which can be avoided once you are aware spades. East will win with the ace of

around the decisions that are faced by the of what might go wrong. spades, and none of declarer’s remaining

declarer at trick one. On many deals, this is cards will be promoted. Declarer should

the most important trick, so it is wise to instead play low from the dummy. If East

decide on a plan before playing to the first The Opening Leader Leads has the singleton ace of spades, the king of

trick. However, even when this hurdle has a High (Honour) Card spades will be promoted. However, it is

been crossed, errors can still creep in. In more likely that the queen of spades will

this article, I shall attempt to deal with win the first trick, after which West will

some of the more common positions that Mistake No. 1: likely continue spades. Whether he plays a

can go awry, and look at ways to make sure ‘Cover an Honour with an Honour’ low spade, or a second high spade, dummy

that the declarer enjoys more success going should again play low. Again, there is no

forward. When the opening leader begins with a advantage in playing the king of spades,

high card, there will clearly be no problem while playing low might promote the ´K

Why is the First Trick so Important? if dummy cannot beat that card. However, if East has no choice but to win trick two

if dummy has a higher card, the declarer with the ´A.

the defenders when playing to the first should be played. A simple mistake to fix Mistake No. 2:

trick, since the opening leader has to make is the idea that you should ‘cover an ‘Failing to Protect a High Card’

a choice based on his thirteen cards (and honour with an honour’. This idea is often

the auction), while the declarer can make useful when playing as a defender and may Although you should not automatically

decisions based on both his cards and erroneously be applied by a declarer. How- cover an honour at trick one, there are

dummy’s. In many instances, the first trick ever, as a declarer, you can assess whether situations where it can be a mistake not to

also represents an opportunity to set goals there is any advantage to covering the beat the opening leader’s card. This can

or targets. This is especially true when opening lead. seem quite confusing, but knowing why a

playing duplicate pairs or teams, as the Consider Example A: play should be made is often the key to

declarer may be able to assess that his goal making the right decision.

is not the same as the trick target required ´K82 Consider Example B:

to fulfil his contract (being defeated by a W

trick can be better than having your oppo- S

Once again, South is the declarer in 4™.

West leads the jack of spades.

When it comes to winning tricks in the

Free trial ´ Acol widely played is irrelevant, but it may be that dummy

has another suit which will be vulnerable

Special subscription rates for EBU members if attacked by West, but not by East.

Imagine that dummy also has ®K-5-4 and

Friendly & fun online club for all players declarer has ®9-8-6. If West wins trick one

with the jack of spades and then switches