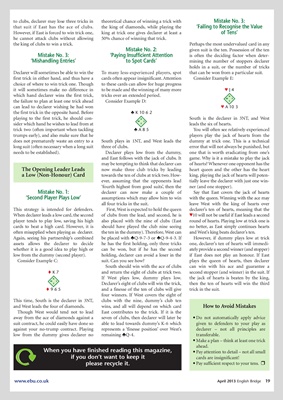 to clubs, declarer may lose three tricks in theoretical chance of winning a trick with Mistake No. 3:

that suit if East has the ace of clubs. the king of diamonds, while playing the ‘Failing to Recognise the Value

However, if East is forced to win trick one, king at trick one gives declarer at least a of Tens’

he cannot attack clubs without allowing 50% chance of winning that trick.

the king of clubs to win a trick. Perhaps the most undervalued card in any

Mistake No. 2: given suit is the ten. Possession of the ten

Mistake No. 3: ‘Paying Insufficient Attention is often the deciding factor when deter-

holds in a suit, or the number of tricks

Declarer will sometimes be able to win the To many less-experienced players, spot that can be won from a particular suit.

choice of where to win trick one. Though to these cards can allow for huge progress

which hand declarer wins the first trick, tricks over an extended period. N

the failure to plan at least one trick ahead Consider Example D: S

playing to the first trick, he should con- W

South is the declarer in 3NT, and West

sider which hand he wishes to lead from at S

leads the six of hearts.

trumps early), and also make sure that he players play the jack of hearts from the

does not prematurely waste an entry to a South plays in 1NT, and West leads the dummy at trick one. This is a technical

long suit (often necessary when a long suit three of clubs. error that will not always be punished, but

needs to be established). Declarer plays low from the dummy, one that is worth eradicating from one’s

and East follows with the jack of clubs. It game. Why is it a mistake to play the jack

may be tempting to think that declarer can of hearts? Whenever one opponent has the

a Low (Non-Honour) Card towards the ten of clubs at trick two. How- king, playing the jack of hearts will poten-

ever, assuming that the opponents lead tially leave the declarer with just one win-

‘fourth highest from good suits’, then the ner (and one stopper).

Mistake No. 1: declarer can now make a couple of Say that East covers the jack of hearts

‘Second Player Plays Low’ assumptions which may allow him to win with the queen. Winning with the ace may

all four tricks in the suit. leave West with the king of hearts over

This strategy is intended for defenders. First, West is expected to hold the queen declarer’s ten of hearts, meaning that the

When declarer leads a low card, the second of clubs from the lead, and second, he is ™10 will not be useful if East leads a second

player tends to play low, saving his high also placed with the nine of clubs (East round of hearts. Playing low at trick one is

cards to beat a high card. However, it is should have played the club nine seeing no better, as East simply continues hearts

often misapplied when playing as declarer. the ten in the dummy). Therefore, West can and West’s king beats declarer’s ten.

assets allows the declarer to decide he has the first holding, only three tricks one, declarer’s ten of hearts will immedi-

whether it is a good idea to play high or can be won, but if he has the second ately provide a second winner (and stopper)

low from the dummy (second player). holding, declarer can avoid a loser in the if East does not play an honour. If East

Consider Example C: suit. Can you see how? plays the queen of hearts, then declarer

tK7 and return the eight of clubs at trick two. second stopper (and winner) in the suit. If

N If West plays low, dummy plays low. the jack of hearts is beaten by the king,

t965 and a finesse of the ten of clubs will give trick in the suit.

four winners. If West covers the eight of

This time, South is the declarer in 3NT, clubs with the nine, dummy’s club ten

and West leads the four of diamonds. wins, and all will depend on which card How to Avoid Mistakes

Though West would tend not to lead East contributes to the trick. If it is the

away from the ace of diamonds against a seven of clubs, then declarer will later be • Do not automatically apply advice

suit contract, he could easily have done so able to lead towards dummy’s K-6 which given to defenders to your play as

against your no-trump contract. Playing represents a ‘finesse position’ over West’s declarer – not all principles are

low from the dummy gives declarer no remaining ®Q-4. transferable.

• Make a plan – think at least one trick

When you have finished reading this magazine, • Pay attention to detail – not all small

if you don’t want to keep it cards are insignificant!

please recycle it. • Pay sufficient respect to your tens. r