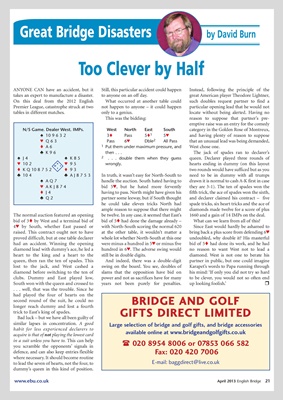 Too Clever by Half

ANYONE CAN have an accident, but it Still, this particular accident could happen Instead, following the principle of the

takes an expert to manufacture a disaster. to anyone on an off day. great American player Theodore Lightner,

Premier League, catastrophe struck at two not happen to anyone – it could happen particular opening lead that he would not

tables in different matches. only to a genius. locate without being alerted. Having no

This was the bidding: reason to suppose that partner’s pre-

emptive raise was an entry for the comedy

™ Q63 Pass 6™ Dble2 All Pass that an unusual lead was being demanded,

t A6 1 Put them under maximum pressure, and West chose one.

™ 95 wrongly. hearts ending in dummy (on this layout

´ AQ7 handle the auction. South hated having to drawn it is normal to cash A-K first in case

t J4 having to pass. North might have given his fifth trick, the ace of spades won the sixth,

® Q2 partner some leeway, but if South thought and declarer claimed his contract – five

he could take eleven tricks North had spade tricks, six heart tricks and the ace of

The normal auction featured an opening be twelve. In any case, it seemed that East’s 1660 and a gain of 14 IMPs on the deal.

bid of 3t by West and a terminal bid of bid of 5t had done the damage already – What can we learn from all of this?

4™ by South, whether East passed or with North-South scoring the normal 620 Since East would hardly be ashamed to

raised. This contract ought not to have at the other table, it wouldn’t matter a bring back a plus score from defending 6™

proved difficult, but at one table declarer whole lot whether North-South at this one undoubled, why double it? His masterful

had an accident. Winning the opening were minus a hundred in 5™ or minus five bid of 5t had done its work, and he had

diamond lead with dummy’s ace, he led a hundred in 6™. The adverse swing would no reason to want West not to lead a

heart to the king and a heart to the still be in double digits. diamond. West is not one to berate his

queen, then ran the ten of spades. This And indeed, there was a double-digit partner in public, but one could imagine

lost to the jack, and West cashed a swing on the board. You see, doubles of Karapet’s words to Papa running through

diamond before switching to the ten of slams that the opposition have bid on his mind: ‘If only you did not try so hard

clubs. Dummy and East played low, power and not as sacrifices have for many to be clever, you would not so often end

South won with the queen and crossed to years not been purely for penalties. up looking foolish.’ r

had played the four of hearts on the

second round of the suit, he could no

trick to East’s king of spades.

Bad luck – but we have all been guilty of

similar lapses in concentration. A good Large selection of bridge and golf gifts, and bridge accessories

habit for less experienced declarers to

acquire is that of not playing the lowest card available online at www.bridgeandgolfgifts.co.uk

in a suit unless you have to. This can help

where necessary. It should become routine

to lead the seven of hearts, not the four, to E-mail: baggdirect@live.co.uk

dummy’s queen in this kind of position.