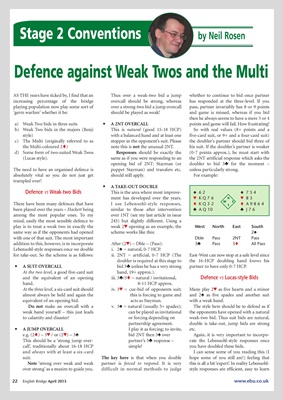 Defence against Weak Twos and the Multi

AS THE years have ticked by, I find that an Thus over a weak-two bid a jump whether to continue to bid once partner

increasing percentage of the bridge overcall should be strong, whereas has responded at the three-level. If you

playing population now play some sort of over a strong-two bid a jump overcall pass, partner invariably has 8 or 9 points

‘germ warfare’ whether it be: should be played as weak! and game is missed, whereas if you bid

then he always seems to have a mere 3 or 4

a) Weak Two bids in three suits • A 2NT OVERCALL points and game will fail. How frustrating!

style) with a balanced hand and at least one five-card suit, or 9+ and a four-card suit)

c) The Multi (originally referred to as stopper in the opponent’s suit. Please the doubler’s partner should bid three of

the Multi-coloured 2t) note this is not the unusual 2NT. his suit. If the doubler’s partner is weaker

d) Some form of two-suited Weak Twos Responses should be exactly the (0-7 points approx.), he must start with

(Lucas style). same as if you were responding to an the 2NT artificial response which asks the

opening bid of 2NT: Stayman (or doubler to bid 3® for the moment –

The need to have an organised defence is puppet Stayman) and transfers etc. unless particularly strong.

absolutely vital so you do not just get should still apply. For example:

There have been many defences that have I use Lebensohl-style responses, t KQ32 S t A9864

among the most popular ones. To my over 1NT (see my last article in issue

mind, easily the most sensible defence to 245) but slightly different. Using a

play is to treat a weak two in exactly the weak 2™ opening as an example, the West North East South

same way as if the opponents had opened scheme works like this: 2´

with one of that suit. The most important Dble Pass 2NT Pass

for take-out. So the scheme is as follows: ii. 2NT = artificial, 0-7 HCP (The East-West can now stop at a safe level since

• A SUIT OVERCALL bid 3® unless he has a very strong partner to have only 0-7 HCP.

and the equivalent of an opening iii. 3®/3t = natural / invitational, Defence vs Lucas-style Bids

At the three level, a six-card suit should iv. 3™ = cue-bid of opponents suit; Many play 2™ as five hearts and a minor

equivalent of an opening bid. acts as Stayman. with a weak hand.

Do not make an overcall with a v. 3´ = natural (usually 5+ spades); The style here should be to defend as if

to calamity and disaster! or forcing depending on weak-two bid. Thus suit bids are natural,

• A JUMP OVERCALL I play it as forcing; to invite, etc.

call’, traditionally about 16-18 HCP simple! you have doubled these bids.

suit. The key here is that when you double hope some of you still are!) feeling that

Note ‘strong over weak and weak partner is forced to respond. It is very this is all a bit ‘expert’. In reality Lebensohl-

over strong’ as a maxim to guide you. difficult in normal methods to judge style responses are efficient, easy to learn