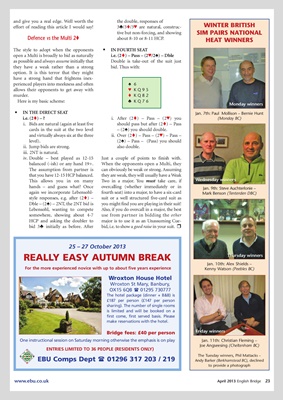 and give you a real edge. Well worth the the double, responses of

effort of reading this article I would say! 3®/3t/3™ are natural, construc- WINTER BRITISH

The style to adopt when the opponents • IN FOURTH SEAT

they have a weak rather than a strong bid. Thus with:

have a strong hand that frightens inex-

perienced players into meekness and often ´ 6

allows their opponents to get away with ™ KQ95

i. Bids are natural (again at least five should pass but after (2t) – Pass

cards in the suit at the two level – (2´) you should double.

balanced (-ish) or any hand 19+. When the opponents open a Multi, they

The assumption from partner is can obviously be weak or strong. Assuming

that you have 12-15 HCP balanced. they are weak, they will usually have a Weak

This allows you in on many Two in a major. You must take care, if Wednesday winners

hands – and guess what? Once overcalling (whether immediately or in Jan. 9th: Steve Auchterlonie –

again we incorporate Lebensohl- fourth seat) into a major, to have a six-card Mark Benson (Tenterden DBC)

style responses, e.g. after (2t) – suit or a well structured five-card suit as

Lebensohl, wanting to compete Also, if you do overcall in a major, the best

somewhere, showing about 4-7 use from partner in bidding the other

bid 3® initially as before. After bid, i.e. to show a good raise in your suit. r

The hotel package (dinner + B&B) is

sharing). The number of single rooms

is limited and will be booked on a

make reservations with the hotel.

One instructional session on Saturday morning otherwise the emphasis is on play Jan. 11th: Christian Fleming –

ENTRIES LIMITED TO 36 PEOPLE (RESIDENTS ONLY)

to provide a photograph