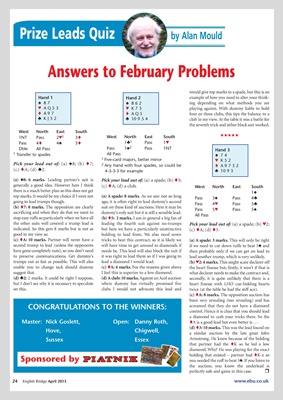 would give top marks to a spade, but this is an

t A97 t AQ5 four or three clubs, this tips the balance to a

the seventh trick and either black suit worked.

going to lead trumps though. ago, it is often right to lead dummy’s second Pass 4™ Pass 5®

(b) t7: 8 marks. The opposition are clearly suit on these kind of auctions. Here it may be

sacrificing and when they do that we want to dummy’s only suit but it is still a sensible lead.

stop easy ruffs so particularly when we have all (b) t5: 2 marks. I am in general a big fan of

the other suits well covered a trump lead is leading the fourth suit against no-trumps Pick your lead out of: (a) a spade; (b) ™2;

indicated. So this gets 8 marks but is not as but here we have a particularly unattractive (c) tA; (d) t3.

good in my view as: holding to lead from. We also need seven

(c) tA: 10 marks. Partner will never have a tricks to beat this contract, so it is likely we (a) A spade: 3 marks. This will only be right

have gone completely nuts), so you don’t need needs be. This lead will also block the suit if then probably only if we can get on lead to

to preserve communications. Get dummy’s it was right to lead them so if I was going to lead another trump, which is very unlikely.

trumps out as fast as possible. This will also lead a diamond I would lead: (b) ™2: 4 marks. This might scare declarer off

enable you to change tack should dummy (c) tA: 4 marks. For the reasons given above the heart finesse but, firstly, it won’t if that is

suggest that. I feel this is superior to a low diamond. what declarer needs to make the contract and,

on this. clubs I would not advocate this lead and twice (at the table he had the stiff ace).

been very revealing (too revealing) and has

CONGRATULATIONS TO THE WINNERS: screamed that they do not have a diamond

control. Hence it is clear that you should lead

a diamond to cash your tricks there. So the

Master: Nick Goslett, Open: Danny Roth, tA is a good lead but even better is . . .

Hove, Chigwell, a similar auction by the late great John

Sussex Essex Armstrong. He knew because of the bidding

that partner had the tK so he led a low

diamond. Why? He was playing for the exact

holding that existed – partner had tK-x so

Sponsored by you needed the ruff to beat 5´. If you listen to

the auction, you know the underlead is

perfectly safe and gains in this case. r