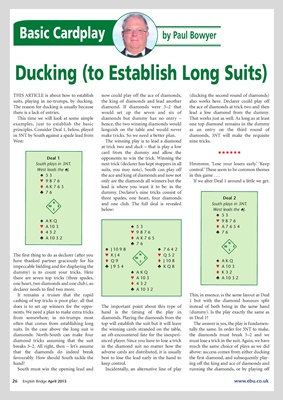 THIS ARTICLE is about how to establish now could play off the ace of diamonds, (ducking the second round of diamonds)

suits, playing in no-trumps, by ducking. the king of diamonds and lead another also works here. Declarer could play off

The reason for ducking is usually because diamond. If diamonds were 3–2 that the ace of diamonds at trick two and then

there is a lack of entries. would set up the seven and six of lead a low diamond from the dummy.

This time we will look at some simple diamonds but dummy has no entry – That works just as well. As long as at least

examples, just to establish the basic hence, the two winning diamonds would one top diamond remains in the dummy

principles. Consider Deal 1, below, played languish on the table and would never as an entry on the third round of

in 3NT by South against a spade lead from make tricks. So we need a better plan. diamonds, 3NT will make the requisite

West: The winning play is to lead a diamond nine tricks.

at trick two and duck – that is play a low

card from the dummy and allow the HHHHHH

Deal 1 opponents to win the trick. Winning the

South plays in 3NT. next trick (declarer has kept stoppers in all Hmmmm. ‘Lose your losers early.’ ‘Keep

West leads the ´J. suits, you may note), South can play off control.’ These seem to be common themes

™ 9876 only are the diamonds all winners but the If we alter Deal 1 around a little we get:

N and one club. The full deal is revealed South plays in 3NT.

S below: West leads the ´J.

It remains a truism that the rapid This, in essence, is the same layout as Deal

cashing of top tricks is poor play: all that 1 but with the diamond honours split

nents. We need a plan to make extra tricks hand is the timing of the play in (dummy). Is the play exactly the same as

from somewhere; in no-trumps most diamonds. Playing the diamonds from the in Deal 1?

often that comes from establishing long top will establish the suit but it will leave The answer is yes, the play is fundamen-

suits. In the case above the long suit is the winning cards stranded on the table, tally the same. In order for 3NT to make,

diamonds: North-South can make four an oft-encountered fate for the inexperi- the diamonds must break 3–2 and we

diamond tricks assuming that the suit enced player. Since you have to lose a trick must lose a trick in the suit. Again, we have

breaks 3–2. All right, then – let’s assume in the diamond suit no matter how the much the same choice of plays as we did

that the diamonds do indeed break adverse cards are distributed, it is usually above: success comes from either ducking

favourably. How should South tackle the best to lose the lead early in the hand to the first diamond, and subsequently play-

hand? keep control. ing off the king and ace of diamonds and

South must win the opening lead and Incidentally, an alternative line of play running the diamonds, or by playing off