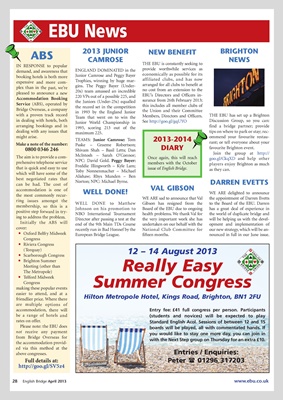 IN RESPONSE to popular THE EBU is constantly seeking to

ENGLAND DOMINATED in the provide worthwhile services as

demand, and awareness that

Junior Camrose and Peggy Bayer economically as possible for its

booking hotels is both more

Trophies, winning by huge mar- affiliated clubs, and has now

gins. The Peggy Bayer (Under- arranged for all clubs to benefit at

plex than in the past, we’re no cost from an extension to the

pleased to announce a new 20s) team amassed an incredible

Service (ABS), operated by this includes all member clubs of

the record set in the competition

Bridge Overseas, a company the Union and their Committee

with a proven track record Members, Directors and Officers. THE EBU has set up a Brighton

Team that went on to win the

in dealing with hotels, both Junior World Championship in See http://goo.gl/gqUYO Discussion Group, so you can:

arranging bookings and in 1995, scoring 213 out of the find a bridge partner; provide

dealing with any issues that maximum 225. tips on where to park or stay; rec-

Make a note of the number: Paske – Graeme Robertson;

The aim is to provide a com- Once again, this will reach goo.gl/CkqXD and help other

members with the October players enjoy Brighton as much

that is quick and easy to use Freddie Illingworth – Kyle Lam;

issue of English Bridge. as they can.

which will have some of the

can be had. The cost of

accommodation is one of VAL GIBSON

the most commonly recur-

WELL DONE! WE ARE delighted to announce

ring issues amongst the

WELL DONE to Matthew Gibson has resigned from the to the Board of the EBU. Darren

membership, so this is a

positive step forward in try- NBO International Tournament health problems. We thank Val for the world of duplicate bridge and

ing to address the problem. Director after passing a test at the the very important work she has will be helping us with the devel-

cover: recently run in Bad Honnef by the National Club Com mittee for our new strategy, which will be an-

easier to attend, and at a

are multiple options of

accommodation, there will Entry fee: £41 full congress per person. Participants

rates on offer. Standard English Acol. Sessions of between 12 and 15

Please note: the EBU does boards will be played, all with commentated hands. If

not receive any payment you would like to stay one more day, you can join in

from Bridge Overseas for

with the Next Step group on Thursday for an extra £10.

ed via this method at the