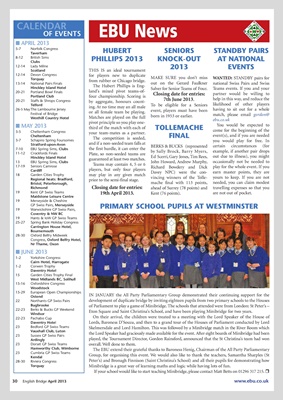 Scotland THIS IS an ideal tournament

Torquay MAKE SURE you don’t miss WANTED: STANDBY pairs for

from rubber or Chicago bridge.

Salver for Senior Teams of Four. Teams events. If you and your

Closing date for entries: partner would be willing to

Telford To be eligible for a Seniors likelihood of other players

ing. At no time may an all male

26-5 May The Lambourne Jersey event, players must have been having to sit out for a whole

Festival of Bridge or all female team be playing.

Westhill Country Hotel Matches are played on the full

pivot principle so you play one-

your team-mates as a partner.

The competition is seeded, FINAL event(s), and if you are needed

you would play for free. In

Stratford-upon-Avon and if a non-seeded team falls at

7-10 EBU Spring Sims, Clubs the first hurdle, it can enter the

Plate, so non-seeded teams are

Hinckley Island Hotel Ed Scerri, Gary Jones, Tim Rees, out due to illness), you might

Richard Bowdery and Dick play for the whole event. If you

Cardiff players, but only four players

Davey NPC) were the con- earn master points, they are

18 Garden Cities Trophy may play in any given match

Regional heats: Bradford, vincing winners of the Tolle- yours to keep. If you are not

prior to the semi-final stage.

Richmond Closing date for entries: ahead of Surrey (78 points) and travelling expenses so that you

Bugbrooke of Parliament to play a game of Minibridge. The schools that attended were from London: St Peter’s –

Eton Square and Saint Christina’s School, and have been playing Minibridge for two years.

22-23 Pachabo Cup On their arrival, the children were treated to a meeting with the Lord Speaker of the House of

Daventry Hotel Lords, Baroness D’Souza, and then to a grand tour of the Houses of Parliament conducted by Lord

23 Bedford GP Swiss Teams Skelmersdale and Lord Hamilton. This was followed by a Minibridge match in the River Room which

the Lord Speaker had graciously made available for the event. After eight boards of Minibridge had been

Hamworthy Club, Wimborne The EBU extend their grateful thanks to Baroness Henig, Chairman of the All Party Parliamentary

Group, for organising this event. We would also like to thank the teachers, Samantha Sharples (St

Torquay Minibridge is a great way of learning maths and logic while having lots of fun.