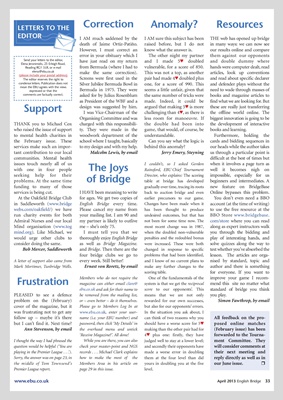 LETTERS TO THE Correction Anomaly? Resources

death of Jaime Ortiz-Patiño. raised before, but I do not in many ways: we can now see

However, I must correct an know what the answer is. our results online and compare

Send your letters to the editor, have just read on my return and I made 5™ doubled and double dum my where

Reading RG1 5LR, or e-mail from Bermuda (where I had to vulnerable, for a score of 850. hands were computer dealt, read

elena@ebu.co.uk make the same correction). This was not a top, as another articles, look up conventions

(please include your postal address)

condense letters. Publication does not Silver Jubilee Bermuda Bowl in one, for a score of 990. This and defender plays without the

mean the EBU agrees with the views

expressed or that the Bermuda in 1975. They were seems a little unfair, given that need to wade through masses of

comments are factually correct. asked for by Julius Rosenblum the same number of tricks were books and magazine articles to

as President of the WBF and a made. Indeed, it could be find what we are looking for. But

Support design was suggested by him.

I was Vice-Chairman of the

argued that making 5™ is more

challenging than 4™, as there is

these are really just transferring

the offline world online. The

Organising Committee and was less room for manoeuvre. If biggest innovation is going to be

who raised the issue of support ty. They were made in the game, that would, of course, be books and learning.

to mental health charities in woodwork department of the understandable. Furthermore, holding the

the February issue. These school where I taught, basically Can you say what the logic is cards and bidding sequences in

services make such an impor- to my design and with my help. behind this anomaly? our heads while the author takes

tant contribution to our local Malcolm Lewis, by email Jerry Emery, Steyning us through a particular point is

communities. Mental health difficult at the best of times but

issues touch nearly all of us I couldn’t, so I asked Gordon when it involves a page turn as

with one in four people The Joys Rainsford, EBU Chief Tournament well it becomes nigh on

seeking help for their Director, who explains: The scoring impossible, especially for us

problems. At the same time of Bridge table at bridge has developed beginners and intermediates. A

funding to many of those gradually over time, tracing its roots new feature on BridgeBase

services is being cut. I HAVE been meaning to write back to auction bridge and even Online bypasses this problem.

At the Oakfield Bridge Club for ages. We get two copies of earlier precursors to our game. You don’t even need a BBO

in Saddleworth (www.bridge English Bridge every time. Changes have been made when it account (at the time of writing)

webs.com/oakfield/) we have Please cancel my name from has been thought to produce to use the free resource at the

run charity events for both your mailing list. I am 90 and undesired outcomes, but that has BBO Store www.bridgebase.

Admiral Nurses and our local my partner is likely to outlive not been for some time now. The com/store where you can read

Mind organisation (www.tog me – she’s only 75. most recent change was in 1987, along as expert instructors walk

mind.org). Like Michael, we I must tell you that we when the doubled non-vulnerable you through the bidding and

would urge other clubs to thoroughly enjoy English Bridge penalties and the redoubled bonus play of interesting hands, and

consider doing the same. as well as Bridge Magazine. were increased. These were both solve quizzes along the way to

Bob Mercer, Saddleworth and Bridge. Then there are the changed in response to specific test whether you’ve absorbed the

four bridge clubs we go to problems that had been identified, lesson. The articles are orga-

A letter of support also came from every week. Still better! and I know of no current plans to nised by standard, topic and

Mark Mortimer, Tunbridge Wells. Ernest von Roretz, by email make any further changes to the author and there is something

scoring table. for everyone. If you want to

ebu.co.uk and ask for their name to score to our opponents’. This standard of bridge you think

PLEASED to see a defence be removed from the mailing list, means that we are not only you play.

problem on the (February) or – even better – do it themselves. rewarded for our own successes, Simon Fawthrop, by email

cover of the magazine, but it Please go to Members Log In at but also for our opponents’ errors.

was frustrating not to get any www.ebu.co.uk, enter your user- In the situation you ask about, I

follow up – maybe it’s there name (i.e. your EBU number) and can think of two reasons why you All feedback on the pro-

but I can’t find it. Next time? password, then click ‘My Details’ in should have a worse score for 5™ posed online matches

Ann Stevenson, by email the overhead menu and untick making than the other pair had for (February issue) has been

‘Receive Magazine?’. All done! 4™ plus one: firstly, they have forwarded to the Tourna-

I thought the way I had phrased the While you are there, you can also judged well to stay at a lower level; ment Committee. They

playing in the Premier League . . .’). records . . . Michael Clark explains made a worse error in doubling their next meeting and

Sorry, the answer was on page 23, in how to make the most of the them at the four level than did reply directly as well as in

the middle of Tom Town send’s Members Area in his article on yours in doubling you at the five our June issue. r