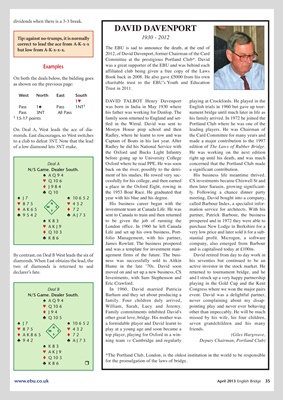 dividends when there is a 3-3 break.

correct to lead the ace from A-K-x-x

but low from A-K-x-x-x. The EBU is sad to announce the death, at the end of

2012, of David Davenport, former Chairman of the Card

affiliated club being given a free copy of the Laws

as shown on the previous page: charitable trust to the EBU’s Youth and Education

1™ DavID TaLBoT Henry Davenport playing at Crockfords. He played in the

Pass 3NT All Pass his father was working for Dunlop. The nament bridge until much later in life as

1 15-17 points family soon returned to England and set- his family arrived. In 1972 he joined the

tled in the Wirral. David was sent to Portland Club where he was one of the

On Deal A, West leads the ace of dia- Mostyn House prep school and then leading players. He was Chairman of

monds. East discourages, so West switches Radley, where he learnt to row and was the Card Committee for many years and

to a club to defeat 3NT. Note that the lead Captain of Boats in his last year. after made a major contribution to the 1997

of a low diamond lets 3NT make. Radley he did his National Service with edition of The Laws of Rubber Bridge.

before going up to University College right up until his death, and was much

Deal A oxford where he read PPE. He was soon concerned that the Portland Club made

N/S Game. Dealer South. back on the river, possibly to the detri- a significant contribution.

™ Q 10 6 cessfully for his college, and then earned CS investments became Chiswell St and

t J984 a place in the oxford Eight, rowing in then later Sarasin, growing significant-

® Q 10 the 1953 Boat Race. He graduated that ly. Following a chance dinner party

™ 875 N ™ 432 His business career began with the called Barbour Index, a specialist infor-

t AK65 S t 72 investment team at Canada Life. He was mation service for architects. With his

® 9542 ® AJ73 sent to Canada to train and then returned partner, Patrick Barbour, the business

™ AKJ9 London office. In 1960 he left Canada purchase New Lodge in Berkshire for a

t Q 10 3 Life and set up his own business, Port- very low price and later sold it for a sub-

and was a template for investment man- and is capitalised today at £100m.

By contrast, on Deal B West leads the six of agement firms of the future. The busi- David retired from day to day work in

diamonds. When East obtains the lead, the ness was successfully sold to aitkin his seventies but continued to be an

two of diamonds is returned to seal Hume in the late ’70s. David soon active investor in the stock market. He

declarer’s fate. moved on and set up a new business, CS returned to tournament bridge, and he

Investments, with Sam Stephenson and and I struck up a very happy partnership

Eric Crawford. playing in the Gold Cup and the Kent

Deal B In 1960, David married Patricia Congress where we won the major pairs

N/S Game. Dealer South. Barham and they set about producing a event. David was a delightful partner,

t J94 Family commitments inhibited David's other than impeccably. He will be much

® Q 10 5 other great love, bridge. His mother was missed by his wife, his four children,

*The Portland Club, London, is the oldest institution in the world to be responsible

for the promulgation of the laws of bridge.