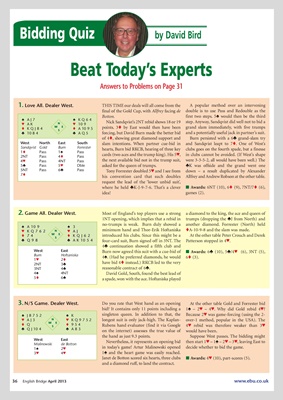 1. Love All. Dealer West. THIS TIME our deals will all come from the A popular method over an intervening

final of the Gold Cup, with Allfrey facing de double is to use Pass and Redouble as the

Botton. first two steps. 5´ would then be the third

Nick Sandqvist’s 2NT rebid shows 18 or 19 step. Anyway, Sandqvist did well not to bid a

t A 10 9 5 points. 3t by East would then have been grand slam immediately, with five trumps

® 10 8 4 ® AQ5 forcing, but David Burn made the better bid and a potentially useful jack in partner’s suit.

of 4t, showing great diamond support and Burn persisted with a 6® grand-slam try

West North East South slam intentions. When partner cue-bid in and Sandqvist leapt to 7t. One of West’s

2NT Pass 4t Pass cards (two aces and the trump king). His 5™, in clubs cannot be avoided. (If West’s shape

5® Pass 5™ Dble asked for the queen of trumps. ®K was offside and the grand went one

his convention card that such doubles Allfrey and Andrew Robson at the other table.

request the lead of the ‘lower unbid suit’,

2. Game All. Dealer West. Most of England’s top players use a strong a diamond to the king, the ace and queen of

1NT opening, which implies that a rebid in trumps (dropping the ®J from North) and

W E introduced his clubs. Since this might be a

4® continuation showed a fifth club and

5t 6® a spade, won with the ace. Hoftaniska played

3. N/S Game. Dealer West. Do you rate that West hand as an opening At the other table Gold and Forrester bid

the hand as just 9.3 points. Suppose West passes. The bidding might

1´ 2™ in today’s game! Artur Malinowski opened decide whether to bid the game.

and a diamond ruff, to land the contract.