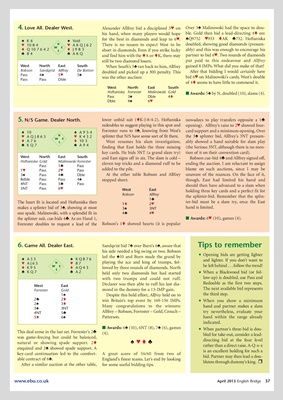 4. Love All. Dealer West. Alexander Allfrey bid a disciplined 5™ on Over 3´ Malinowski had the space to dou-

his hand, when many players would hope ble. Gold then bid a lead-directing 4t on:

™ AKQJ62 There is no reason to expect West to be doubled, showing good diamonds (presum-

and find him with the tA or tK, there may partner to bid 6™. Two rounds of diamonds

still be two diamond losers. put paid to this endeavour and Allfrey

West North East South When South’s 5´ ran back to him, Allfrey gained 8 IMPs. What did you make of that?

Robson Sandqvist Allfrey De Botton doubled and picked up a 300 penalty. This After that bidding I would certainly have

was the other auction: bid 6™ on Malinowski’s cards. West’s double

of 4t seems to have little to commend it.

redoubles to suggest playing in this spot and opening). Allfrey’s raise to 2™ showed four-

N splinter that N/S have some sort of fit there. the 3´ splinter bid, Allfrey’s 3NT presum-

finding that East holds the three missing (the Serious 3NT, although there is no men-

key cards. He bids 5NT (a grand slam try) tion of it on their convention card).

West North East South and East signs off in six. The slam is cold – Robson cue-bid 4® and Allfrey signed off,

eleven top tricks and a diamond ruff to be ending the auction. I am reluctant to assign

1™ Pass 2™ Pass added to the pile. blame on such auctions, since I may be

3´ Pass 4® Dble At the other table Robson and Allfrey unaware of the nuances. On the face of it,

Rdble Pass Pass 4´ stopped short: though, East had limited his hand and

the splinter-bid. Remember that the splin-

The heart fit is located and Hoftaniska then 1t 2™

ter-bid must be a slam try, once the East

makes a splinter bid of 3´, showing at most 3´ 3NT hand is limited.

one spade. Malinowski, with a splendid fit in 4® 4™

6. Game All. Dealer East. Sandqvist bid 7´ over Burn’s 6´, aware that Tips to remember

his side needed a big swing or two. Robson

t AQ43 lowed by three rounds of diamonds. North be left behind . . . follow the trend!

low-up) is doubled, use Pass and

with two trumps and could not ruff.

Declarer was then able to ruff his last dia- Redouble as the first two steps.

Forrester Gold mond in the dummy for a 13-IMP gain. The next available bid represents

1´ Despite this bold effort, Allfrey held on to the third step.

Many congratulations to the winners:

• When you show a minimum

hand and partner makes a slam

• When partner’s three-bid is dou-

bled for take-out, consider a lead-

was game-forcing but could be balanced,

directing bid at the four level

rather than a direct raise. A-Q-x-x

enquired and 2´ showed spade support. A

is an excellent holding for such a

bid. Partner may then lead a dou-

After a similar auction at the other table, for some useful bidding tips.