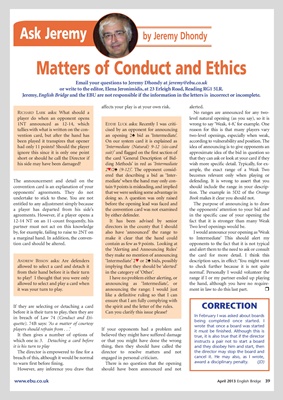 Matters of Conduct and Ethics

Email your questions to Jeremy Dhondy at jeremy@ebu.co.uk

affects your play is at your own risk. alerted.

RICHARD LARK asks: What should a No ranges are announced for any two-

player do when an opponent opens level natural opening (as you say), so it is

vention card, but after the hand has an opening 2´ bid as ‘Intermediate’. two-level openings, especially when weak,

been played it transpires that opener On our system card it is explained as according to vulnerability and position. The

had only 11 points? Should the player ‘Intermediate (Natural) 9-12 (six-card idea of announcing is to give opponents an

his side may have been damaged? ding Methods’ in red as ‘Intermediate wish more specific detail. Typically, for ex-

The announcement and detail on the mediate’ when the hand may only con- defending. It is wrong to assert that you

convention card is an explanation of your tain 9 points is misleading, and implied should include the range in your descrip-

opponents’ agreements. They do not that we were seeking some advantage in tion. The example in 5D2 of the Orange

undertake to stick to these. You are not doing so. A question was only raised Book makes it clear you should not.

agreements. However, if a player opens a by either defender. in the specific case of your opening the

12-14 NT on an 11-count frequently, his It has been advised by senior fact that it is stronger than many Weak

partner must not act on this knowledge directors in the county that I should Two level openings would be.

by, for example, failing to raise to 2NT on also have ‘announced’ the range to I would announce your opening as ‘Weak

a marginal hand. In addition, the conven- make it clear that the hand could to Intermediate’ This should alert my

tion card should be altered. contain as few as 9 points. Looking at opponents to the fact that it is not typical

they make no mention of announcing the card for more detail. I think this

ANDREW BISSON asks: Are defenders ‘Intermediate’ 2™ or 2´ bids, possibly description says, in effect: ‘You might want

from their hand before it is their turn in the category of ‘Other’. normal’. Personally I would volunteer the

to play? I thought that you were only I have no problem either alerting, or range if I or my partner ended up playing

allowed to select and play a card when announcing as ‘Intermediate’, or the hand, although you have no require-

it was your turn to play. announcing the range; I would just ment in law to do this last part. r

ensure that I am fully complying with

If they are selecting or detaching a card the spirit and the letter of the rules. CORRECTION

before it is their turn to play, then they are Can you clarify this issue please?

being completed once started. I

wrote that once a board was started

players should refrain from . . .’ If your opponents had a problem and it must be finished. Although this is

It then gives a number of options of believed they might have suffered damage true, it is also true that if the director

which one is: 3. Detaching a card before or that you might have done the wrong instructs a pair not to start a board

it is his turn to play thing, then they should have called the and they disobey him and start, then

breach of this, although it would be normal engaged in personal criticism. cancel it. He may also, as I wrote,

to warn first before fining. There is no question that the opening award a disciplinary penalty. (JD)

However, any inference you draw that should have been announced and not