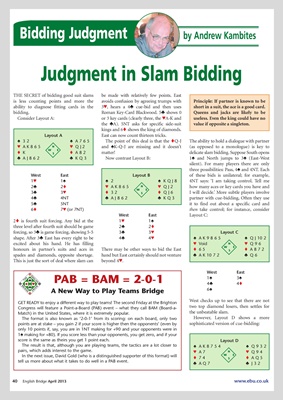 THE SECRET of bidding good suit slams be made with relatively few points. East

is less counting points and more the avoids confusion by agreeing trumps with Principle: If partner is known to be

ability to diagnose fitting cards in the 3™, hears a 4® cue-bid and then uses short in a suit, the ace is a good card.

bidding. Roman Key-Card Blackwood. 5® shows 0 Queens and jacks are likely to be

Consider Layout A: or 3 key cards (clearly three, the ™A-K and useless. Even the king could have no

the ®A). 5NT asks for specific side-suit value if opposite a singleton.

kings and 6t shows the king of diamonds.

silent). For many players there are only

three possibilities: Pass, 4´ and 4NT. Each

West East Layout B of these bids is unilateral; for example,

5® 5NT it to find out about a specific card and

three level after fourth suit should be game 2® 2t

spades and diamonds, opposite shortage. hand but East certainly should not venture ® A K 10 7 2 ® Q6

This is just the sort of deal where slam can beyond 4™.

GET READY to enjoy a different way to play teams! The second Friday at the Brighton West checks up to see that there are not

Congress will feature a Point-a-Board (PAB) event – what they call BAM (Board-a- two top diamond losers, then settles for

Match) in the United States, where it is extremely popular. the unbeatable slam.

The format is also known as ‘2-0-1’ from its scoring: on each board, only two However, Layout D shows a more

points are at stake – you gain 2 if your score is higher then the opponents’ (even by sophisticated version of cue-bidding:

only 10 points if, say, you are in 1NT making for +90 and your opponents were in

1´ making for +80). If you score less than your opponents, you get zero, and if your

score is the same as theirs you get 1 point each. Layout D

In the next issue, David Gold (who is a distinguished supporter of this format) will t 74 S t AQ5

tell us more about what it takes to do well in a PAB event.