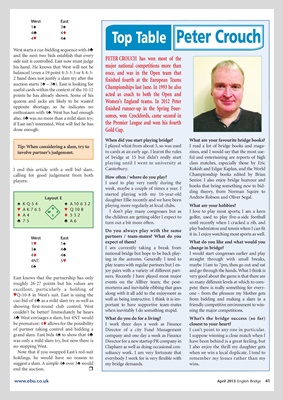 West starts a cue-bidding sequence with 4®

and the next two bids establish that every

side suit is controlled. East now must judge PETER CROUCH has won most of the

his hand. He knows that West will not be major national competitions more than

useful cards within the context of the 10-12 Championships last June. In 1993 he also

points he has already shown. Some of his acted as coach to both the Open and

queens and jacks are likely to be wasted Women’s England teams. In 2012 Peter

opposite shortage, so he indicates no finished runner-up in the Spring Four-

enthusiasm with 4´. West has had enough

also. 4® was no more than a mild slam try; somes, won Crockfords, came second in

if East isn’t interested, West will feel he has the Premier League and won his fourth

When did you start playing bridge? What are your favourite bridge books?

Tip: When considering a slam, try to I played whist from about 5, so was used I read a lot of bridge books and maga-

involve partner’s judgement. to cards at an early age. I learnt the rules zines, and I would say that the most use-

playing until I went to university at class matches, especially those by Eric

I end this article with a well bid slam, Canterbury. Kokish and Edgar Kaplan, and the World

calling for good judgement from both Championship books edited by Brian

I used to play very rarely during the

books that bring something new to bid-

week, maybe a couple of times a year. I

ding theory, from Norman Squire to

started playing with my 16-year-old

daughter Ellie recently and we have been

t A4 S t 532 the children are getting older I expect to golfer, used to play five-a-side football

partners / team-mates? What do you it in. I enjoy watching most sports as well.

1™ 1´ expect of them? What do you like and what would you

3´ 4® I am currently taking a break from change in bridge?

4NT 5™ ing in the autumn. Generally I tend to straight through with small breaks,

6´ play teams with regular partners but I en- maybe 11am to 7pm, then go out and eat

joy pairs with a variety of different part- and go through the hands. What I think is

East knows that the partnership has only ners. Recently I have played most major very good about the game is that there are

roughly 26-27 points but his values are events on the Allfrey team; the post- so many different levels at which to com-

excellent, particularly a holding of mortems and inevitable ribbing that goes pete: there is really something for every-

™Q-10-8 in West’s suit. East is using the along with it all add to the enjoyment as one – from the pleasure my Mother gets

cue-bid of 4® as a mild slam try as well as well as being instructive. I think it is im- from bidding and making a slam in a

couldn’t be better! Immediately he hears when inevitably I do something stupid. ning the major competitions.

4® West envisages a slam, but 4NT would What do you do for a living? What’s the bridge success (so far)

be premature: 4t allows for the possibility I work three days a week as Finance closest to your heart?

of partner taking control and bidding a Director of a city Fund Management I can’t point to any one in particular.

grand slam. East bids 4´ to show that 4® company and one day a week as Finance I suppose winning a close match when I

was only a mild slam try, but now there is Director for a new startup PR company in have been behind is a great feeling, but

no stopping West. Clapham as well as doing occasional con- I also enjoy the thrill my daughter gets

Note that if you swapped East’s red-suit sultancy work. I am very fortunate that when we win a local duplicate. I tend to

holdings, he would have no reason to everybody I work for is very flexible with remember my losses rather than my

suggest a slam. A simple 4´ over 3´ would my bridge demands. wins.